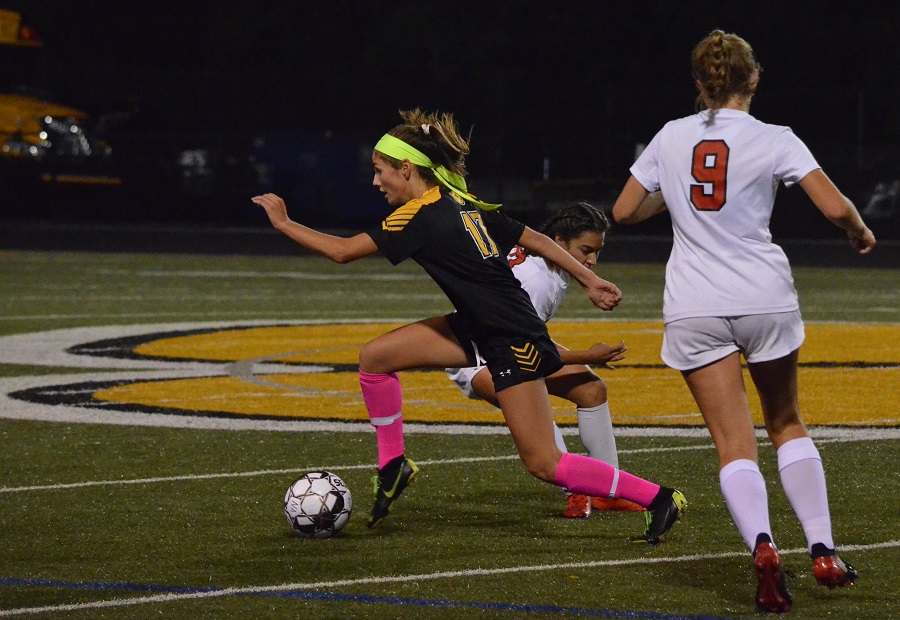 In a meeting between two playoff-bound teams, the North Allegheny Tigers edged the Fox Chapel Foxes on Monday night for a 2-1 triumph at Newman Stadium. Senior Emma Bundy propelled the Tigers to victory by scoring the game-winning goal with just 1:45 remaining in the game. The win secures an outright Section 1-AAAA title for North Allegheny. It’s the first section crown for the Tigers since 2013.

In the first half, Fox Chapel was successful in its effort to contain the North Allegheny forwards and play keep away. The Foxes dictated the pace for most of the half, but the Tigers began to solve their strategy late in the half despite a scoreless tie by intermission.

In the second half, North Allegheny settled in and scored the first goal of the game on a marker by junior Sarah Schupansky with 19:58 to play. Schupansky lofted a shot from 25-yards out over the leaping effort of Fox Chapel goalie Molly McNaughton and under the crossbar for a 1-0 North Allegheny lead. The goal was Schupansky’s team-leading 14th of the season.

Fox Chapel tied the game just five minutes later when Lucy Ream, an Eastern Kentucky recruit, sent a centering pass in front of the net to a wide-open Lauren Rabbitt for a tap-in goal and the game was knotted up at 1-1. Ream collided with NA goalie Madison Vukas on the play, which temporarily forced her from the game. Vukas, who made eight saves on the night, returned to the contest a short time later.

With time ticking down in the second half, North Allegheny avoided overtime as Schupansky got free down the right sideline and placed a perfect cross to Bundy on the doorstep for the game-winning goal with 1:45 left to play and a 2-1 Tigers victory. With one goal and one assist on the night, Schupansky was named the Wright Automotive Player of the Game.