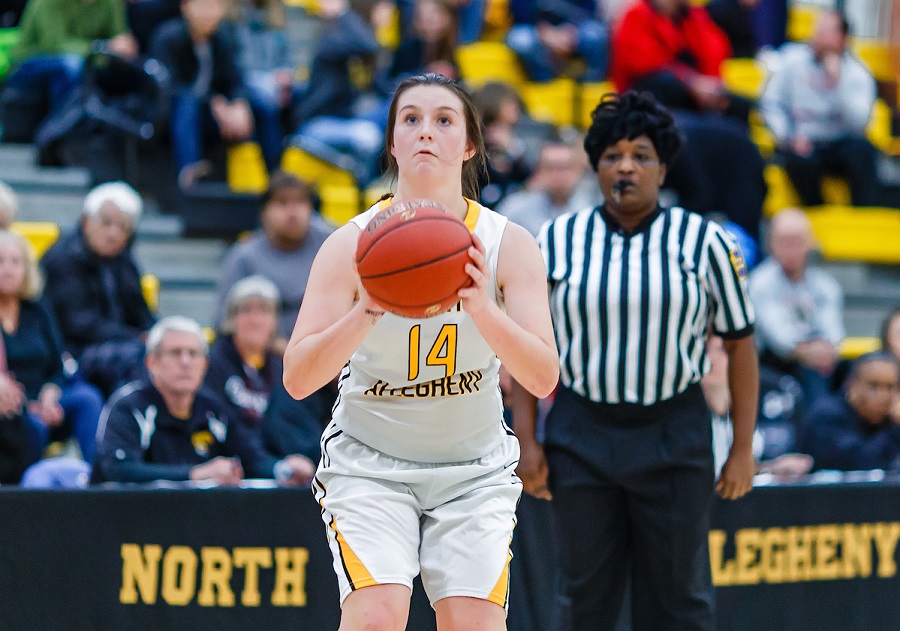 A stifling defense and timely 3-point shooting in the second half helped the top-ranked North Allegheny Tigers to a 66-40 win over the Kennedy Catholic Golden Eagles on Wednesday afternoon at the Wright Automotive Holiday Tournament. The Tigers forced 20 turnovers and outrebounded the Golden Eagles, 41-21, en route to the win.

The first half was a defensive skirmish with each team struggling from the floor. North Allegheny led 21-17 at intermission before pulling away with a dominant second half. The Tigers shot 56-percent and ran away with the game over the final 16 minutes. Junior guard Rachel Martindale played a prominent role with 20 points and eight rebounds, adding three steals, three assists and one block in a terrific all-around performance. For her play, Martindale was named the Wright Automotive Player of the Game.

Kennedy Catholic, winners of the District 10 crown in Class A for seven consecutive seasons, were limited to 33-percent shooting from the field. Sophomore point guard Malia Magestro led the Golden Eagles with 14 points but fouled out in the fourth quarter. Air Force Academy commit Sophia Berardi netted 10 points.

With the win, North Allegheny leaps to 6-0 overall, while Kennedy Catholic falls to 3-2 on the season. The Lady Tigers will play in the 1:00 p.m. game on Thursday as the Wright Automotive Holiday Tournament continues. NA will face the winner between Gilmour Academy and Franklin Regional.