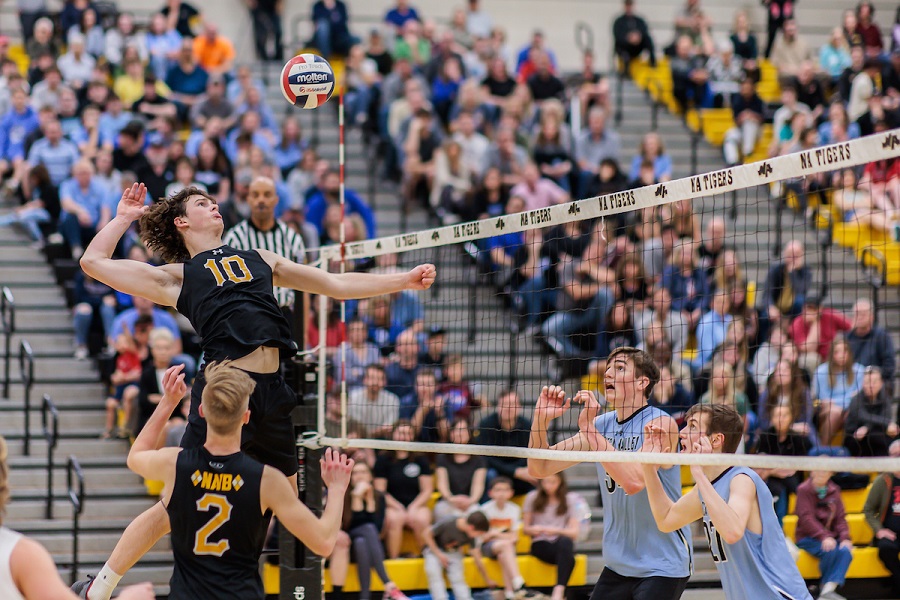 North Allegheny and Seneca Valley came in ranked No. 1 & No. 2 respectively according to the WPVCA rankings. The Raiders sported an unblemished record of (8-0, 6-0) while the Tigers were a perfect (5-0, 5-0). Throw in the fact that these teams met four times last year with North Allegheny winning all four, including in the WPIAL Championship game and in the PIAA semifinals.

So, it was no surprise, that each set during tonight’s match was close, and it may or may not be surprising that the Tigers took the victory over the Raiders in straight sets (26-24, 34-32, 25-22).

Jack Birch set the tone from the outset for the Tigers with an opening kill from the middle, and the senior was consistently strong throughout for the Tigers. Even though North Allegheny swept all four matches last season against Seneca Valley, the sets were close and that was the theme tonight. The Tigers opened-up a 12-6 lead in the first set, only to see the Raiders rally to take a 21-20 lead. The set reached 24-24, before the Tigers recorded the last two points for the win. In addition to Birch, junior Nico Sfair had a strong set with four kills.

The second set was the most back-and-forth of the night. The biggest lead for each team was two points, with Seneca Valley leading 13-11 and the Tigers at 16-14. It was mostly one point leads each way, with each team getting four set points until the Tigers pulled out the 34-32 extra points win. Birch and Sfair were strong again with contributions from senior Caleb Schall who functioned as a setter at the net as the Tigers used their allotted number of rotations. Junior Varun Kaveti also contributed with several kill and block points.

The Raiders, led by UCLA recruit Coleman McDonough, Lewis College commit Nate DeGraaf and senior Dawson Ward, built a 17-13 lead in the third set, before Titus LaMay propelled the Tigers ahead from the service line. North Allegheny rattled off seven straight points, 4 of which came on aces from the Senior hitter. Leading 20-17, the Raiders got as close as 23-21, before the Tigers closed out the match with a 25-22 win.

Jack Birch, who was strong at the net all night (15 kills/4 blocks) earned the Wright Automotive Player of the Match honors for the Tigers.

The Tigers visit Pine-Richland on Monday night before returning home Tuesday to host Shaler in a match that can be heard on the North Allegheny Sports Network.