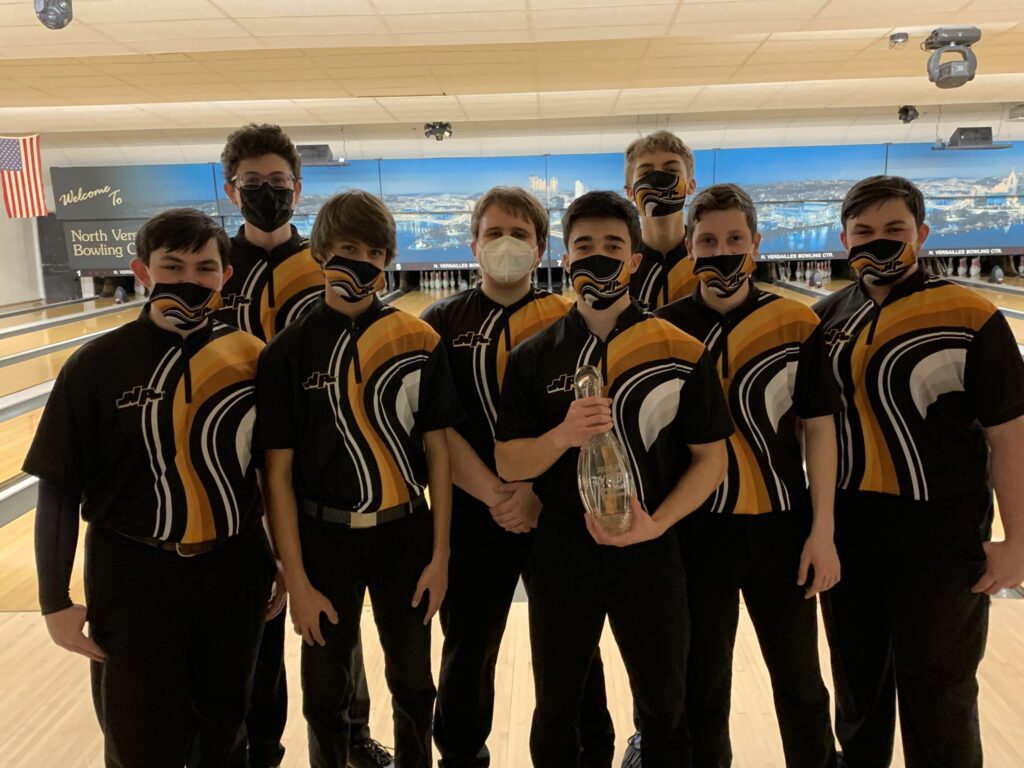 The Tigers kicked off the post-season on Wednesday competing in the 2021 Western Pennsylvania Interscholastic Bowling League Boys Team Championships.  The WPIBL is composed of nine sections, with the top two teams in each section qualifying for the competition.  Representing the North Section were the 10-0 North Allegheny Tigers and the 8-2 Butler Golden Tornadoes.  Butler’s only losses were by the hands of NA.  Eighteen of the best high school boys teams in Western PA entered today’s competition vying for the coveted crystal WPIBL trophy and more importantly the title of WPIBL Team Champion.

Due to Covid-19 restrictions, the teams bowled in pods consisting of three teams.  Within the pod the teams would switch lanes at the conclusion of each game.  The Tigers entered the day as the #1 team in the WPIBL having averaged 1002 pins per game.  NA was the only team to eclipse the 1000 pin threshold.  NA started on lanes 15-16.  Coming in at #2 was Hempfield (991) from the Southeast section on lanes 17-18 and rounding out the top 3 was Freeport (941) from the Northeast on lanes 19-20.  Senior anchor for Freeport, Mark Livingston, had the highest regular season average (226) of all WPIBL bowlers entering today.  Close on his heels was North Allegheny senior, Dylan Scheidler, with a 223.

Having the top qualifiers bowl together allowed the teams to gauge each other from the onset.  This year’s match was bowled on the Kegel Challenge Series oil pattern called Broadway.  This 37’ pattern has 3 times the amount of oil in the center of the lane as compared to normal oil patterns.  Bowlers must be precise and accurate to achieve high scores.  These sport patterns are designed for professional or highly experienced bowlers, allow no room for error, and even the most experienced bowlers can have a hard time figuring out their technique and timing with these patterns.

After Game 1, Hempfield took an early lead over NA 946-892.  Not far behind, the Butler Golden Tornadoes occupied the third position at 887.

In addition to a switching of lanes for game 2, junior Gavin Rush would replace Sostmann as the leadoff bowler.  The oil conditions transitioned quickly, and the Tigers needed to adjust.  Leading the Tigers were Cook and Scheidler both with a 176.  Other scores contributed from NA were Lydon-169, Jorden-145, and Rush-140.  NA’s 2nd game (806) dropped them down to 3rd place trailing both Butler and Hempfield.

The streak of Tigers banded together for the third game.  The catalyst for this reaction was the substitution of junior Noah Sostmann.  Sostmann took over the number #1 position and started game 3 with a strike.  This was quickly repeated by Jorden and Scheidler.  Noah then threw a turkey in frames 3-5 and Lydon a 4-bagger in frames 4-7.  Jorden contributed a turkey in the 10th.  Not to be outdone, Noah finished the game with 5 in a row resulting in the highest 3rd game thrown of the 90 bowlers, a 237.  Jorden finished with a 193, Lydon-177, Scheidler-175, and Cook-170.  North Allegheny’s 3rd game of a 952 was the highest game thrown for the entire competition and allowed them to jockey position back into 2nd over Hempfield.

After 3 games, the top 3 scoring teams make it out of the preliminary round and into the head-to-head finals.  The top seed and the bye went to Butler with a 2706.  NA took the second seed with a 2650 and Hempfield survived the cut with a 2571.

Additionally, the top 5 bowlers for the day were selected as the ALL-WPIBL Team.  Receiving this honor was Andrew Cook.  His 569 series awarded him the 5th and final spot on the team.  For the day Scheidler knocked over 542 for the 11th best score, followed by Jorden at #17 with a 517, and Lydon made it into the top-25 with his 22nd place finish with a 508.

For the format of each round of the finals, the game changes from the traditional bowling game, into a best of three Baker game series.  Baker competitions are unique because they are always bowled as a team and every member must work together on the same bowling game. Typically found in Collegiate tournaments, the Baker format comprises of a team of bowlers who rotate bowling in each frame in a game. The leadoff person bowls frames one and six, the second person bowling frames two and seven, and so forth. In a Baker format, a higher emphasis is put on bowling as a team as each shot is crucial to the team’s success; emphasizing the idea of performing as a team by capitalizing upon each other’s strikes and spares for team count.

For Round 1, NA took on Hempfield.  The Tigers started strong in Game #1 with three spares but then proceeded to miss a string of spares in the middle of the game.  This slight hiccup was enough for Hempfield to capitalize, and the first game went to the Spartans, 148-163.  The Tigers quickly found a rhythm, rebounded, and with Cook’s turkey in the 10th frame, NA took game #2, 177-148. The third and final game was a winner take all game.  The turkey thrown by the trio of Scheidler, Cook, and Sostmann in frames 4, 5, and 6 coupled with two open frames by Hempfield was the turning point of the match.  In the end, NA outlasted Hempfield, 164-163.  Two years ago, NA was in a similar position and lost both games in the Championship round to Franklin Regional by 1 pin.  The Tigers enjoyed being on the other side of the coin, narrowly escaping, and were eager to take on section-rival Butler in the Championship round.

The Final Round began with Butler bowling first.  Through the front five, Butler let their nerves get the better of them and opened four of the frames, whereas NA started with 5 marks and the early lead.  Jorden’s finesse in the 8th frame converted another spare as Butler opened once more.  NA threw a clean game (no open frames) for a 199.  Butler mustered up a 127.  The Tigers had the early advantage.

North Allegheny began game 2 much like they finished Game 1, three frames resulted in three marks.  The difference this time is that Butler raised their performance and matched the Tigers frame for frame. In the 8th frame Butler threw a strike and the Tigers opened. This was enough for the Tornadoes to squeak out a victory.  Butler took Game 2, 171 to NA’s 163.  At the end of two, the match was even at one game each.

Noah Sostmann began game 3 with a resonating strike.  Butler threw the dreaded 7-10 split. Early lead to NA.  In the second frame NA opened, and Butler converted the 3-10 baby split.  In the third frame, Jorden throws a strike, Butler converts their spare.  In the 4th, Butler strikes, NA converts the spare.  NA opens the 5th, Butler also opens. Both teams are neck and neck through the front 5.  The match and the Championship remain on the line with each bowler having one frame left to leave their mark.

As a result, the Tigers remain undefeated in match play, and handed Butler their third loss in as many meetings.

This is the first WPIBL Team Title for the Tigers.

Next Wednesday, the Tigers move on to the WPIBL Singles Championships at AMF Mt. Lebanon Lanes.  Andrew Cook, Joey Lydon, Dylan Scheidler, Jeb Jorden, Gavin Rush and 113 of the best high school bowlers in Western PA will be competing in 3 traditional games for individual awards.

On Thursday, Alexis Robinson will represent NA at the Girls Singles Championships which are also being held at AMF Mt. Lebanon Lanes.

Both events will be live-streamed on the NA Bowling Facebook page.