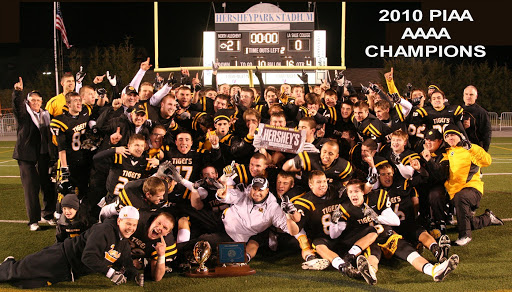 On This Date 10 Years Ago: NA blanked LaSalle College For PIAA Title

Happy 10th Anniversary to the 2010 WPIAL and PIAA champion North Allegheny football team. On this date ten years ago, the Tigers blanked LaSalle College, 21-0, for the Class AAAA title. Boasting arguably the most ferocious defense in program history, NA forced five turnovers and limited one of the most explosive offenses in the state to just 192 total yards. Below is the game recap from 10 years ago as it appeared on the NA Sports Network website. Also, you’ll find a highlight reel of the game courtesy of Digital Horizons.

In a dominating performance on Saturday evening, the North Allegheny Tigers blanked the defending state champions, the LaSalle College Explorers, 21-0 to earn the PIAA title in Hershey, PA.  The Tigers used the same success formula it has all season long, a hard-nosed defense that yielded very little, and a rugged running game that plowed through the LaSalle defense for 220 yards.

LaSalle won the opening coin toss and elected to receive, giving an offense that has averaged 35 points per game a chance to start the game with the football.  As would be the case throughout the evening, the Explorers could not navigate through the Tigers defense.  On their opening possession, LaSalle’s Tim Wade caught a quick pass but was stripped by Rob Kugler.  Tigers’ linebacker Kevin Cope made the recovery at the LaSalle 40-yard line and the first turnover of the game had the NA offense in business.  The Tigers used a nine-play drive to travel those 40 yards, punctuated on a four-yard touchdown run by senior quarterback Michael Buchert to put North Allegheny in front 7-0, just over six minutes into the football game.

The Philadelphia Catholic League champions appeared that they would rebound as LaSalle moved the ball deep into Tigers territory on a 16-play drive.  When a false start side tracked a potential 28-yard field goal attempt, LaSalle’s Matt Magarity threw a pass on 4th and 7 but was turned away on a Seth Marx interception.  It was the first of three interceptions by the Tigers defense on the night.

Before the end of the second quarter, the Tigers had the football at their own 29-yard line and quickly rumbled down field for another touchdown.  After a pair of long runs by Buchert moved the ball to the LaSalle 28-yard line, Matt Steinbeck scored on a reverse with 47 seconds left in the half to increase the Tigers lead to 14-0.

To start the second half, Steinbeck intercepted a Magarity pass and returned it to the LaSalle 23 yard line.  On a 3rd and long situation, the Tigers pitched the ball to receiver Brendan Coniker who then tossed a deep pass to a wide open Dan Slivka for a 30-yard gain to the Explorers one-yard line.  Buchert ran into the end zone untouched on the next play to make it a 21-0 advantage for NA with 7:46 left in the third quarter.

For the remainder of the game, the Tigers used the clock and their stingy defense as their allies.  Time and time again, the NA defense forced punts from the Explorers and the Tigers offense milked time off the clock with every snap.  In all, LaSalle’s offense was limited to 192 yards, with Villanova recruit Jamal Abdur-Rahman rushing for only 49-yards and a 2.9 yard per carry average.  For the first time this season, the dynamic Explorers offense could not discover the end zone.  NA’s defense forced a total of five turnovers in the game.

On offense for the Tigers, Steinbeck led the way on the ground with 120 yards rushing on 20 carries.  For their efforts on this night, and all season long, the entire offensive line was named the Wright Automotive Players of the Game.  From tight end to tight end, Rob and Patrick Kugler, Zach Harvey, Pete Thistle, Justin Haser, Vince Czerniewski, and Seth Marx have provided rushing lanes for a host of different runners and are certainly deserving of the “players” of the game award in a championship winning effort.  To complete the 2010 season, the Tigers finish up with a 15-1 record, adding a WPIAL and PIAA championship in Class Quad-A to the North Allegheny trophy case.