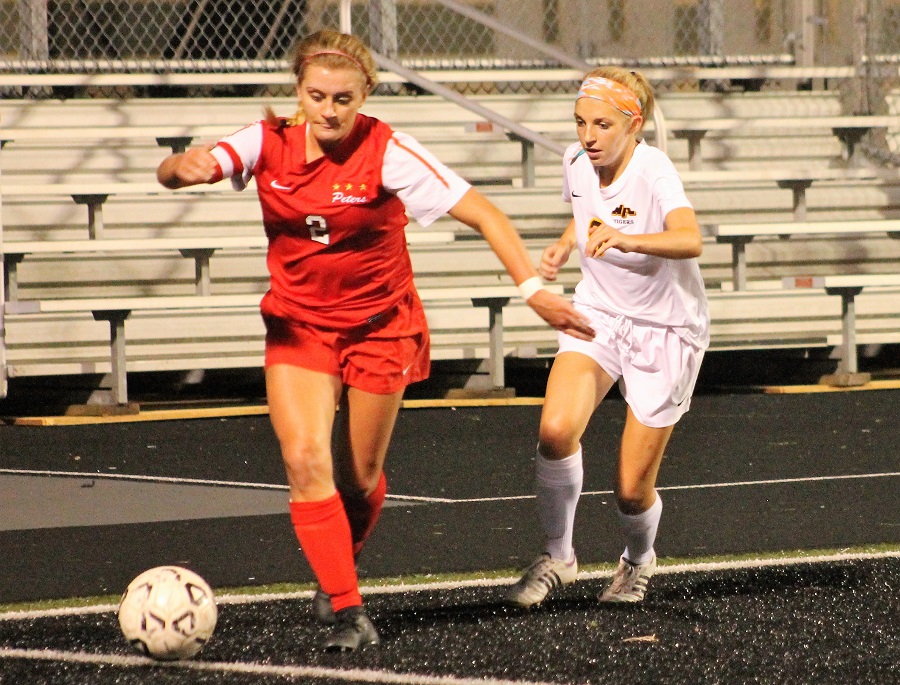 On a breezy, cool September evening, North Allegheny girls soccer returned to the pitch at Wright Field inside the friendly confines of Newman Stadium. The 2017 North Allegheny girls’ soccer season began with a non-section,  weather-shortened game against Peters Township with the Indians edging the Tigers, 2-1.

The game was a very close affair in the early going, with each team getting their chances.  The shots were dead even throughout the first half.  However, In the 13th minute, Peter Township scored off a melee in front of the goal putting them ahead 1-0.  The score stayed the same way for another 25 minutes until a free kick was perfectly placed in the upper right hand corner of the goal giving PT a 2-0 lead heading into the locker room.

North Allegheny came out of the gate firing on all cylinders in the second half and applied intense pressure on the Indians’ net.  A powerful cross from Ava Ruppersburger was directed in by senior Kaley Chomyn to cut the deficit in half, 2-1.

The game, however, would end prematurely when continued lighting strikes and thunder forced the WPIAL’s hand.  The result stood as a 2-1 loss for the Lady Tigers in their season and home opener.

North Allegheny will be in action today as they make the long bus trip to Altoona to face the Mountain Lions.  They are then back in action on Saturday at Upper St. Clair and then Monday at home against the Seneca Valley Raiders.  Thank you to all who came out to support the Lady Tigers as they began their 2017 soccer season especially to our boisterous NA student section.