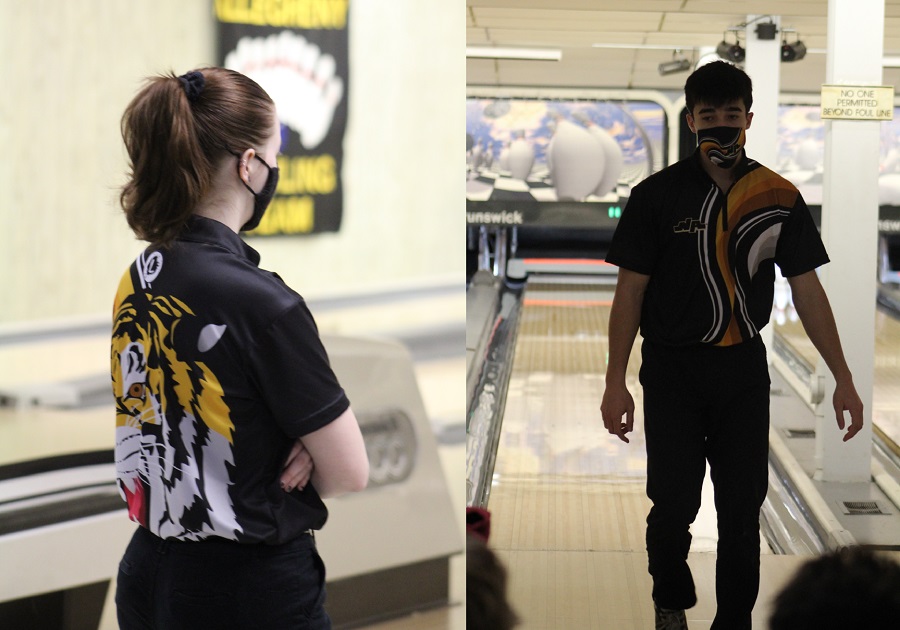 The NA Girls team recorded their 3rd victory of the season taking all seven match points from Seneca Valley.  The Tigers were led once again by Senior Standout, Alexis Robinson.  Robinson had the highest game of the day (202) as well as the highest series total (516).  Sophomore Katrina Price added 150 pins during Game 3 to the total pin count accumulated by NA.

On the Boys side, Senior Standout Dylan Scheidler is peaking at just the right time.  With the post-season on the horizon, Scheidler and the Tigers are looking to make a run deep into the playoffs.

The Seneca Valley Raiders tried to mount an attack early in Game 1 as their seniors, Tiler Stoops and Jason Hartenstein, were perfect through the first four frames.  NA quickly countered, 5 bowlers – 5 strikes.  Scheidler then proceeded to put on a clinic, 6 strikes in 6 frames.  In the 7th frame, a ringing 10-pin ended his run at a perfect game.  Keeping his wits, Scheidler then threw 4 more strikes.  Ten out of a possible 12 throws resulted in strikes and an opening game of 247.  Joining Scheidler at the top of the leaderboard was junior Gavin Rush with a 226. SV’s Stoops and Hartenstein ended with a 199 and 234, respectively.  The Tigers took Game 1 and were in the lead by 560 pins heading into the second game of the match.

Scheidler continued to shine in Game 2 filling up the front seven with seven strikes.  An errant throw in the 8th frame left, again,  a pesky 10-pin.  Scheidler quickly added two more strikes, for a total of nine strikes in Game 2 and a final score of 255.  Junior Jeb Jorden came alive during the second game of the match, changing the trajectory of his ball, and racking up 8 strikes of his own.  Jorden finished with a 241.  Game 2 went to the Tigers as they once again knocked over 1000+ pins in a game.  This is the 13th tally this season.  The Tigers extended their lead after two to 1243 pins.

Game 3 was once again the Scheidler show. He ended the 3rd game with a 246.  Jorden added a 205.  The final game of the match went to the Tigers as the team knocked over 991 pins to finish the competition.  All in all, North Allegheny bowled over 3011 pins for the match.

There are 312 Varsity Boys Bowlers in Western Pennsylvania.  Scheidler is currently ranked #2 and Jorden comes in at #7.

The NA Boys enter the final week of the regular season with a match record of 8-0 and a perfect game record of 24-0.  The Tigers currently reside at the top of the WPIBL 48-team leaderboard with the highest team average.

The Tigers travel to Butler on Wednesday for the final away match of the season.  The Golden Tornadoes are currently in 2nd place in the WPIBL North.  Their only loss was to NA back in Week 1.  This head-to-head rivalry will determine who takes home the title of “King of the North.”  Both teams will see post season action.  Wednesday’s match will be streamed on the NA Bowling Facebook page.