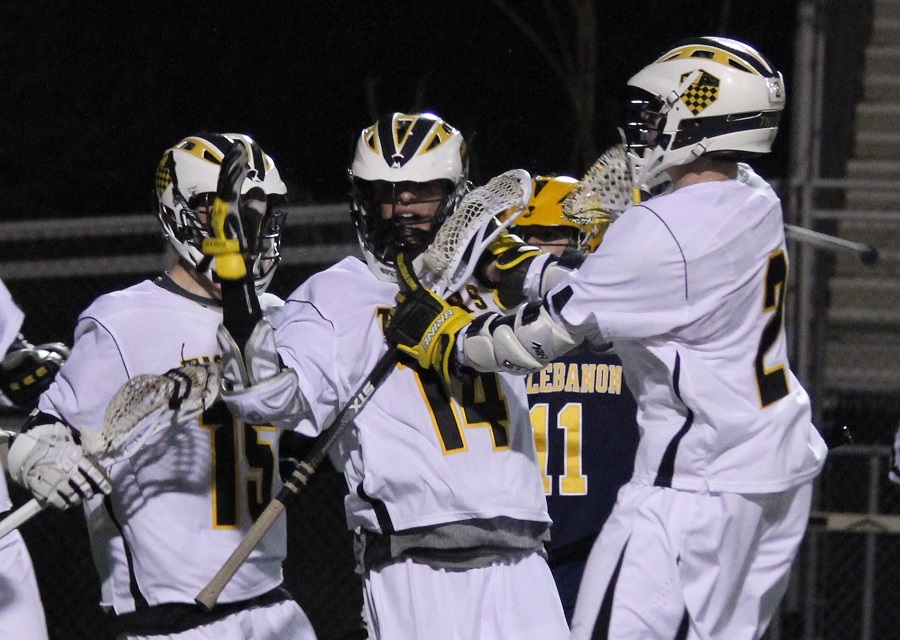 North Allegheny rallied from a three-goal deficit in the second half and claimed a thrilling, 12-11, overtime win over the Mt. Lebanon Blue Devils on Monday night at Newman Stadium.  NA senior Kyle Rullan scored the game tying goal with 53 second remaining and netted the game winner in overtime to snap a seven-game losing streak to the Blue Devils. For his efforts, Rullan was named the Wright Automotive Player of the Game by the North Allegheny Sports Network.

A program with a strong tradition in boys’ lacrosse, Mt. Lebanon has tormented the Tigers in recent years, including narrow playoff defeats the last two seasons. Last year, the Blue Devils rallied from a 9-6 deficit to beat the Tigers, 10-9, in double overtime in the WPIAL semifinals.  However, on Monday night, North Allegheny exacted a nearly identical measure of revenge.

In a see-saw game that had eight ties and five lead changes, the Tigers and Blue Devils traded goals throughout much of the game until Mt. Lebanon seized a 9-6 lead with 5:40 to play in the third quarter.  The Blue Devils were paced by junior Brian Ward who tallied five goals and sophomore Nathan Bashaw who scored four. The opportunistic Blue Devils were 3 for 4 in man-up scenarios.

The Tigers started to march back into the contest on a goal by Will Petraglia late in the third period, and cut the score to 9-8, Blue Devils, when senior Ted Ednaczyk scored with 9:56 left in the fourth.  Less than three minutes later, Alec Vissotski split the defense for a game-tying goal to bring the score to 9-9 with 6:58 to play. North Allegheny continued its surge on a tremendous athletic play by Gavin Hagen who netted the go-ahead goal on a leaping effort from 10 yards out to give the Tigers a 10-9 lead with 4:25 remaining.

Undaunted, Mt. Lebanon tied the game just over a minute later on a Dan Lee goal and grabbed the lead back with 1:53 left to play on a marker by Bashaw. It appeared the Blue Devils were about to continue their trend of close victories over the Tigers, but North Allegheny turned the tables on their south hills foe when Rullan scored the equalizer with 53 seconds on the clock.

In overtime, Ward peppered NA goalie Will Rahenkamp with back-to-back blistering shots but each time the senior net minder denied Mt. Lebanon a potential game winning goal.  Following Rahenkamp’s outstanding saves, the Tigers cleared the ball to midfield and utilized a time out. After the stoppage in play, Rullan took the ball from the midfield area and with a determined drive to the net, culminated the night with a game-winning goal to send North Allegheny to a 12-11 triumph in overtime.

Rullan finished with three goals for the Tigers and senior Zach Smith netted two goals and was pivotal on draws, winning 15 of 21 face offs. Other Tigers goal scorers included Zech Nachazel, Jacob Zemet and Dillon Dugan. Rahenkamp made 13 saves including the two spectacular stops on Ward in the extra session.

North Allegheny improves to 2-0 overall while Mt. Lebanon sits at 0-1 on the young season.  The Tigers travel to Seneca Valley on Wednesday night for an 8:00 pm contest with the Raiders in the section opener.