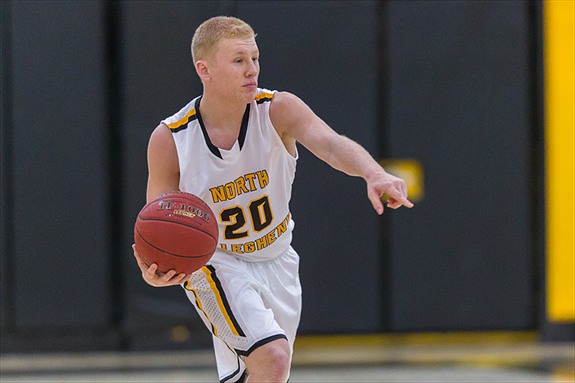 North Allegheny rallied from a 14-point deficit and won it at the buzzer on a three pointer by Will Sandherr for a thrilling 53-50 victory at Mt. Lebanon on Tuesday night.   The Tigers opened the game with a 5-0 run, but trailed most of the night until Sandherr’s heroics in the waning seconds.  Mt. Lebanon led by as much as 14 points in the second quarter, 28-14, with 3:03 to go before halftime.

Leading the NA comeback was senior Cole Constantino who scored a game-high 25 points, and with 26 seconds left in the game, tied the contest at 50-50 with a trey. On Mt. Lebanon’s ensuing possession, Patrick Ehland was fouled on a heads-up play by Sandherr with four seconds remaining.  After Ehland missed both of his free throws, Keegan Phillips corralled the rebound and passed the ball to Sandherr who poured in the game winning triple from the right wing. Sandherr finished with 10 points for the Tigers.

For the Blue Devils, Ehland was 6 of 9 from the field and scored a team-high 16 points and added nine rebounds.  Matt Hofman tallied 12 points and nine rebounds in a losing effort. The Tigers defense held star guard Jonny David to 2 of 10 shooting and just five points.

North Allegheny sits at 3-0 overall with the win while Mt. Lebanon falls to 2-1. The Tigers will host the Shaler Titans on Friday night in their Section 3-AAAA opener.  The game will be broadcast live via the internet as the Quad-A Basketball Game of the Week. Tip-off is set for 8:00 pm.