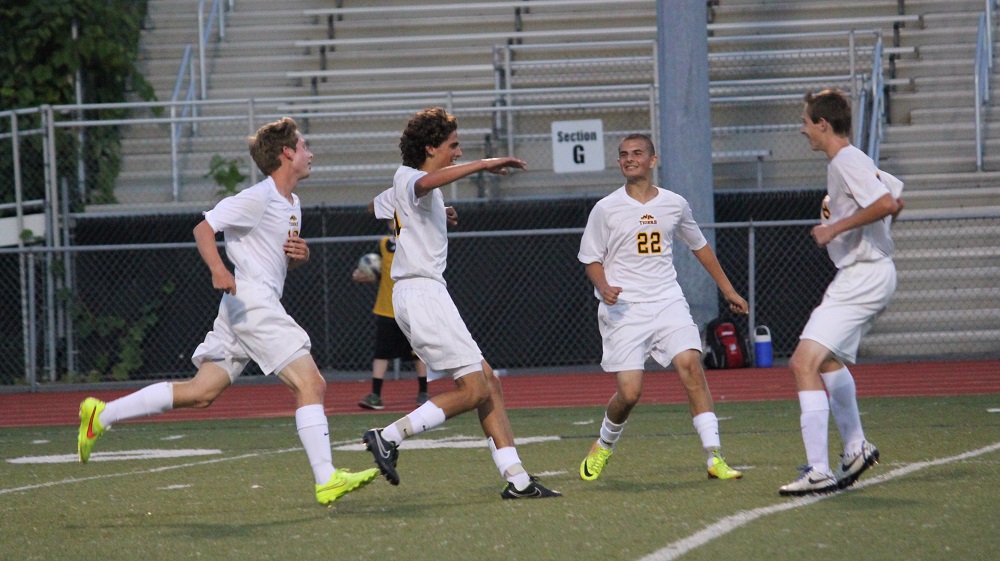 The game started slowly for NA as Seneca had two corner kicks and a shot on goal within the first seven minutes of the contest.  At the 25 minute mark, Seneca forward Matt Saluga sprinted down the left side line and scored the first goal of the game from 10 yards out.  After a few corners for both teams at the 20 minute mark Seneca midfielder Connor McCandless scored off a through ball and broke in all alone on goal to make it 2-0, Raiders.

Binning at the 30 minute mark registered the first NA shot on goal that was saved.  With 15 minutes left Dillon Thomas entered the game and five minutes later Nate Hall, Yosef Ulami and Jason Earle joined the fray.  The Tigers started to sustain some possession at this time along with the defense tightening things up.  Another Binning shot from 30 yards out was saved and the best opportunity of the half with two minutes left was from Earle on a short header that was saved by the Seneca keeper, leaving the halftime score at 2-0.  Seneca had four corners in the half while NA garnered two.  Shots taken were Seneca, 9, and NA, 3.

To start the second half North Allegheny applied some initial pressure and continued ball possession.  Spencer Haesting entered the game six minutes in. Peters had a good opportunity that was saved from about 20 yards out and again Binning 12 minutes in put another shot on goal.  Entering the contest at this time was Bobby Upton and Ulami and their efforts led to chance by Thomas on a header that was just wide delivered by Kevin Dougherty.  Binning from 20 yards had a free kick again go on goal, but was saved.  Nolan kept the Tigers in the game with some remarkable saves on breakaways from the Raiders offense.  Luchini with 12 and then 10 minutes left had some scoring opportunities on nice feeds from Michael Correa and Binning, but both shots sailed high over the crossbar.  Another NA goalie save off a header at the eight minute mark seemed to swing the momentum and NA then had two corners that were near misses by Luchini and Binning.

At the 3:45 mark, Binning found Luchini with a pinpoint pass and the freshman finished it in the Seneca net for his first of the year and cut the deficit to 2-1.  North Allegheny sustained the pressure and was very resilient during the game, but just couldn’t beat the Raider goalie for the tying goal.

The NA Boys team has a home game this Thursday against Hampton at 7pm and we hope to see a good fan base to root the team on to their first section victory.