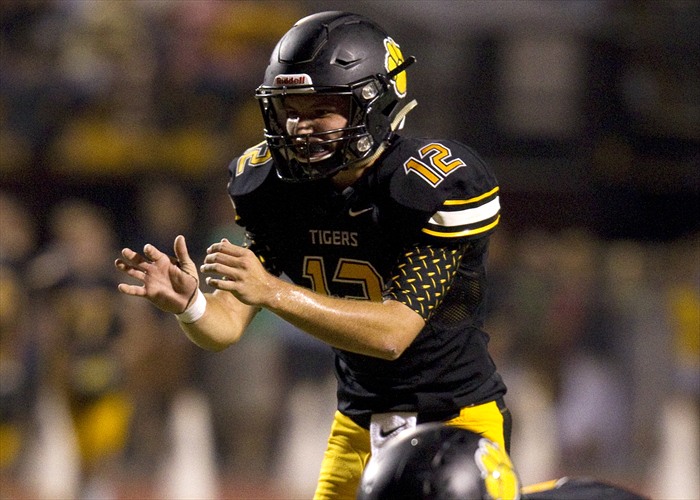 The Seneca Valley Raiders used two turnovers and a blocked extra point to outlast the North Allegheny Tigers in the WPIAL Class 6-A semifinals, 28-27, at Martorelli Stadium. Following a Griff Sestili 3-yard touchdown catch for North Allegheny with no time remaining in the fourth quarter, the Raiders blocked the potential game-tying extra point to hold on for the one-point win and Seneca Valley’s first trip to the WPIAL championship since 1989. The Raiders will face the top-seeded Central Catholic Vikings on Friday at Heinz Field.

After a scoreless first quarter, North Allegheny opened the scoring with a 20-play, 83-yard drive that was punctuated on 10-yard touchdown sweep by senior Niko Mermigas for a 7-0 lead. Seneca Valley tied the game at 7-7 on the ensuing possession thanks to a 2-yard touchdown run by Hank Royal with 3:35 left in the half. North Allegheny drove to the SV 12-yard line on the next drive but Raiders cornerback Walik Shabazz intercepted an Ethan Maenza pass in the end zone with 13 second remaining before halftime to keep the game tied at 7-7.

North Allegheny opened the second half with the football and marched 68 yards on seven plays, culminating the drive on a 5-yard touchdown run by junior running back Turner White to give the Tigers a 14-7 advantage with 8:42 in the third quarter.  White finished the game with 130 yards on 22 carries for the Tigers.

As they did in the first half, the Raiders promptly answered the Tigers and evened the score courtesy of a 43-yard swing pass by Jack Cook to Royal to bring the score to 14-14 with 6:23 remaining in the third period. Continuing to move the football, North Allegheny seemed poised to retake the lead late in the quarter and drove deep into SV territory. However, on a 2nd and 3 carry from the 5-yard line, White fumbled at the 1-yard line and the Raiders’ Jacob Holl recovered in the end zone for a touchback.

Seneca Valley turned the turnover into points and marched 80 yards for a 1-yard touchdown plunge by Cook on a QB sneak on the first play of the fourth quarter to bring the score to 21-14, Raiders. North Allegheny responded with a 14-play drive and converted on two fourth downs along the way. The most critical of the conversions was a 4th and 12 at the Raiders 25-yard line when Maenza delivered a touchdown pass to Mermigas with 5:27 left in regulation to tie the score, 21-21. Maenza ended the night with 122 yards passing and two touchdowns, while rushing for another 116 yards. Mermigas totaled five receptions for 71 yards and a touchdown. To go along with 28 yards rushing and another score on the ground, Mermigas was named the Wright Automotive Player of the Game.

The seesaw nature of the game continued deep into the fourth quarter and the Raiders regained the lead, 28-21, on a 22-yard touchdown catch by Royal from Cook with just 1:27 remaining. Royal hauled in four receptions for 114 yards and two scores, while adding another 74 yards rushing and a touchdown.

Undaunted, North Allegheny drove to the SV 3-yard line with just four seconds remaining. Time for one more play, Maenza tossed a 3-yard touchdown pass to Sestilli to cut the Raiders lead to 28-27 with no time remaining. Needing only an extra point to force overtime, Seneca Valley blocked the Tigers extra point try and the Raiders advanced to the WPIAL title game with a 28-27 triumph.

Seneca Valley improves to 8-3 overall. For North Allegheny, the loss snaps an eight-game winning streak and the Tigers end the season with mark of 9-3.