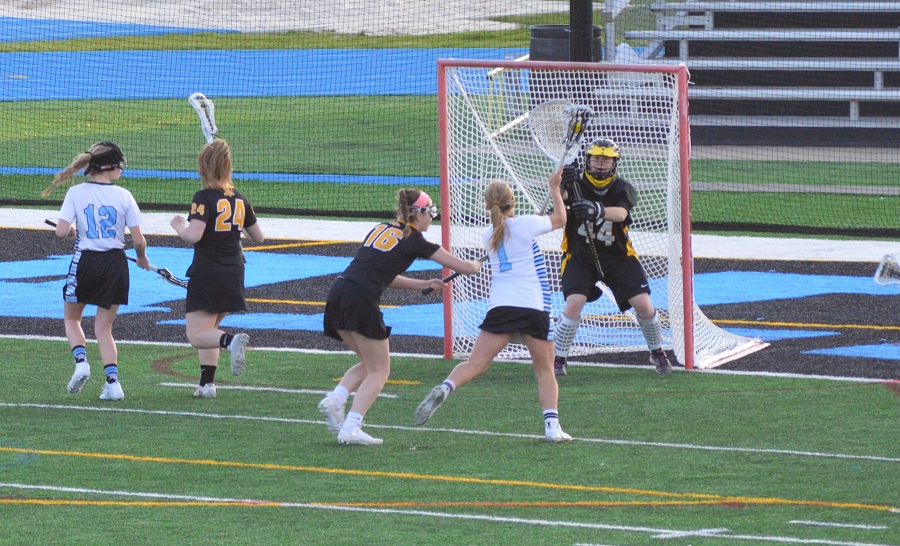 Hoping to build on their first playoff win in program history, the North Allegheny Tigers gave a valiant effort but fell short of the WPIAL final four as section rival Seneca Valley won a 15-9 decision on Wednesday night at Fox Chapel high school. The quarterfinal contest between these two teams was the third time they had met in 2017 with Seneca Valley narrowly winning the two regular season affairs. In this quarterfinal contest, the Raiders led wire to wire to reach the WPIAL semifinals for the first time since 2011.

Seneca Valley struck early and took a 3-0 lead in the first 2:14 of the game. North Allegheny answered back on goals by Brooke Ferringer and Abby Washabaugh to trim the Raiders lead to 3-2 with 13:43 remaining in the first half. However, that would be as close as NA would come as Seneca Valley built a four-goal lead by halftime and kept the Tigers at arm’s length in the second half. Freshman Olivia Ruppert scored a game-high five goals to lead the Raiders. Butler University recruit Karina Latsko added three goals.

Playing from behind most of the night and attempting to rally, the Tigers received a four-goal effort from Washabaugh and a hat trick from Ferringer. Other NA goal scorers included Anna Barton and Caroline Palguta on a terrific pass from Nicole Atkinson.

The 2017 season marked a continued turnaround for the North Allegheny girls’ lacrosse program, one that went winless just two years. The senior class played a pivotal role in this success and for their efforts on Wednesday night and throughout, seniors Abby Washabaugh, Caroline Palguta, Maya Disora, Jenna Prutting, Nadia Durante and senior goalie Katie Shideler were all selected as the Wright Automotive Players of the Game.

North Allegheny concludes the season at 7-9 overall. Seneca Valley improves to 14-4 on the season and will face Fox Chapel in the WPIAL semifinals next week. Congratulations to coach Harry Datz and the North Allegheny girls’ lacrosse team for a memorable season.