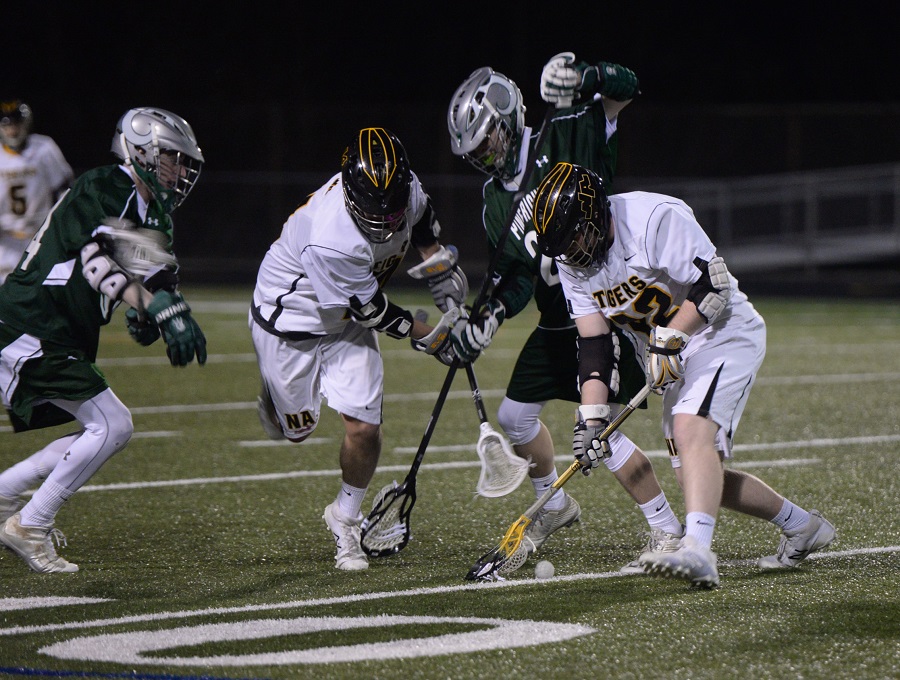 The North Allegheny Tigers earned a hard-fought 9-7 victory over Pine-Richland on Wednesday night.  The reigning WPIAL champions broke a 2-2 deadlock at intermission with five straight goals in the third quarter to get the upper hand on the Rams. Senior Dillon Dugan led the offensive fireworks with a hat trick.

The Tigers struck early, just 24 seconds into the game, getting a goal off the faceoff from senior Alec Vissotski.  The Tigers continued to apply offensive pressure for the first few minutes but goalie Alex Hein made some keys saves for the Rams.  Pine Richland would score the next two goals and held a 2-1 lead after one quarter of play. Dugan netted the only NA goal in the second period, barreling over two players and firing a shot past Hein to tie the game at 2-2. North Allegheny had to kill a penalty for the last 2:40 of the half and only allowed two shots.  Sophomore Ben Maenza used his speed to elude Ram defenders to kill the majority of the penalty.

The Tigers came out strong in the second half, scoring five goals in 5:35 to take a commanding 7-2 lead.  Dugan scored a pair, along with Trevor Saundry, Matt Osten and Wes Powell.  NA took advantage of a two-minute penalty by scoring two of the five goals with the man-up situation.  Pine Richland would not go away, scoring the next three goals and getting a pair from Dawson Goltz and one from Thomas Hanulak to trim the lead to 7-5 at the end of three periods.

Vissotski scored again quickly to start the fourth to break the Rams momentum. Vissotski won the face off and scored 16 seconds into the quarter to build a three-goal lead for the Tigers.  Ben Maenza followed suit two minutes later and things were looking comfortable again at 9-5.  Goalie Ean Kuska made a key save against Ryan Springer from close range to preserve the four goal-lead.  The Rams did score two more goals but the late effort could not complete a PR comeback.

The Wright Automotive Player of the game went to defenseman Jack Kairys.  His name does not appear on the score sheet but his defense was outstanding with numerous steals and deflections, totaling a team-high nine ground balls and six forced errors.

The Tigers improve to 3-1 overall, 2-0 in the section, and will face Shady Side Academy next Thursday night at home.  If you cannot make the game you can listen to it live on the North Allegheny Sports Network.