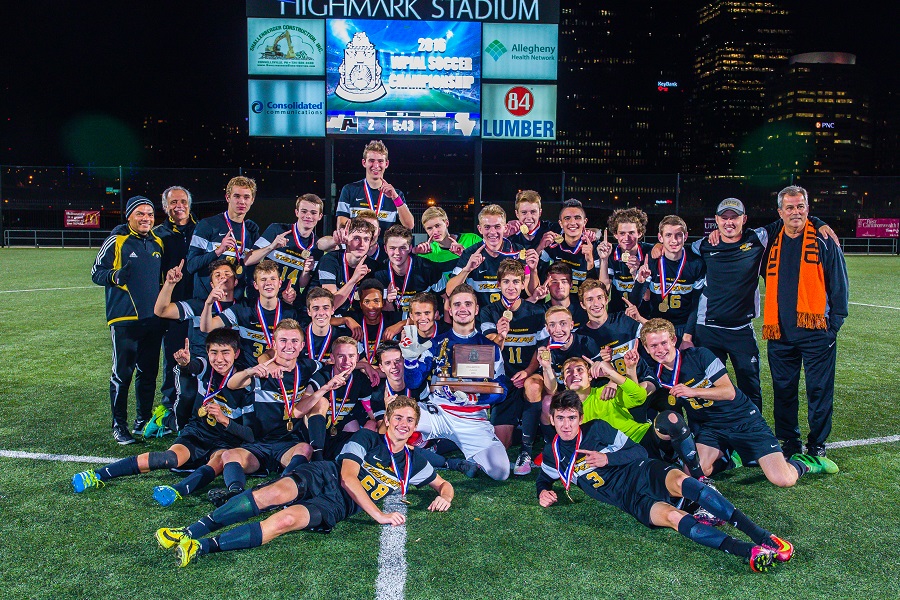 The North Allegheny Tigers won their first WPIAL championship since 1999 with a 2-1 overtime triumph over the Seneca Valley Raiders at Highmark Stadium on Thursday night. Junior Sean Atwater, who scored his first goal of the season in overtime to beat Pine-Richland in the semifinals on Saturday, again connected for the game-winning marker to sink the Raiders in an exciting title tilt. The championship is North Allegheny’s eighth in program history. Its also the third overtime win thus far in the 2016 playoffs for the Tigers.

Seneca Valley, the undefeated top-seed in the Class AAAA bracket, was vying for its first ever WPIAL crown and had the better of the play in the first half. In particular, senior Matt Happ utilized his exceptional speed for several good scoring chances but was either denied by NA keeper Grant Glorioso or missed narrowly wide of the net. After a scoreless first half, the Raiders were able to finally breakthrough for the game’s first goal on a free kick that was lobbed into the box by senior Cole Dengler. The pass was driven into the back of the net by senior Matt Stopar for a 1-0 Seneca Valley lead with 20:59 remaining in the game.

Trailing by a goal, the Tigers had their work cut out for them against Seneca Valley goalie Dylan Good, a first-team All-Section selection, who had allowed only three goals all season. However, North Allegheny managed to tie the game with 2:24 left in regulation on a goal by Josh Luchini. Senior Owen Leonard sent a long pass toward the box from the midfield and Luchini headed the ball past Good to even the score at 1-1. Luchini, the Tigers leading goal scorer the last two seasons, missed most of the 2016 campaign due to injury and played sparingly in his return in the WPIAL semifinals on Saturday. In a do-or-die scenario in the championship contest, Luchini played through the pain and came through with the clutch goal. (Below is an MSA Sports Center Stage interview with Luchini following the win.)

In overtime, Happ nearly gave Seneca Valley the victory with a line-drive shot with 12 minutes remaining in the extra session but was denied on a fantastic save by Glorioso. Making key game-saving plays all night, Glorioso was named the Wright Automotive Player of the Game by the North Allegheny Sports Network.

The play of Glorioso kept North Allegheny in the game and Atwater used one swing of his leg to end it. With 5:43 left in overtime, Atwater delivered his second goal of the season for the game-winning marker and a 2-1 North Allegheny victory.

North Allegheny improves to 15-2-5 on the season, while Seneca Valley suffers its first loss of the year with a 19-1-1 mark. Both teams will participate in the PIAA tournament that begins on Tuesday night.