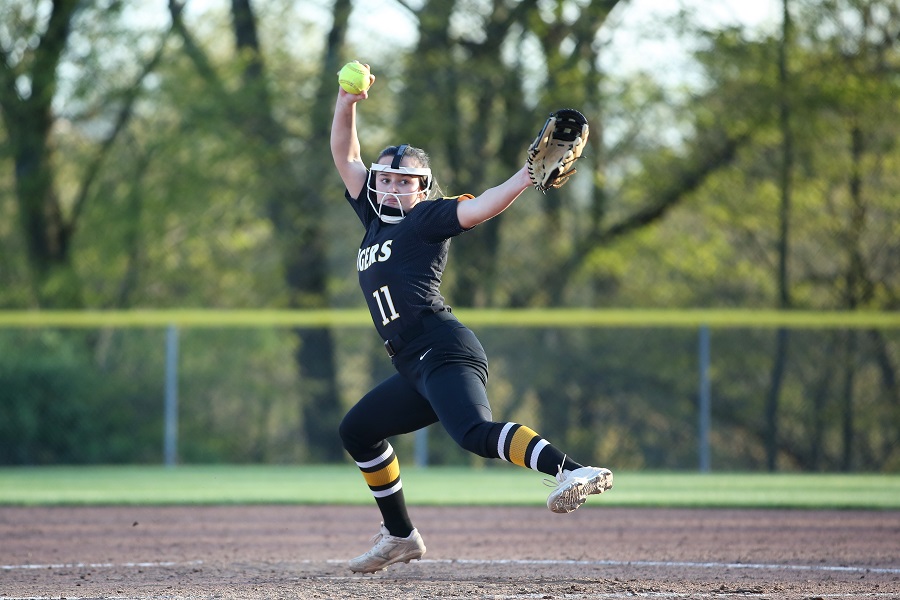 North Allegheny’s late-game rally fell short on Monday night as Hempfield outlasted the Tigers, 3-1, in a Section 2-6A contest. The outcome locked up an outright section title for the Spartans and also kept Norwin’s playoff hopes alive going into to Tuesday’s section finale with North Allegheny.

Hempfield took an early 2-0 lead in the first inning thanks to an RBI single from Hannah Uhrinek and a fielder’s choice RBI groundout by Olivia Grimmer.

Following the two-run first inning, North Allegheny sophomore pitcher Anne Melle held the Spartans in check and scattered four hits and did not allow a run over the next four innings. However, Hempfield managed to break through in the top of the sixth for an insurance run on back-to-back doubles by Olivia Kline and Peyton Heisler. Heisler was 3-for-3 on the night and her RBI double in the sixth increased the Spartans lead to 3-0.

Hempfield freshman starter Riley Miller surrendered only two hits through the first six innings but ran into trouble in the bottom of the seventh. A leadoff walk to McKenna Rowlands helped set the table for the Tigers. Rowlands was advanced to second base on a groundout, and an out later, scored on an RBI double by Melle to trim the deficit to 3-1. Pinch hitter Rachel Rusnica drew a walk to put the game-tying run on the bases. Miller buckled down to strike out the next NA batter to close out the ballgame as Hempfield hung on for the victory.

Miller earned the victory with a complete game effort, permitting only three hits with six strikeouts and two walks. Melle was the hard luck loser and also tossed a complete game, allowing three runs on nine hits with one strikeout and one walk.

Aside from her outstanding pitching, Melle also was 2-for-3 at the plate with a double and RBI, earning Wright Automotive Player of the Game honors.

North Allegheny falls to 10-6 overall and 4-5 in Section 2-6A, while Hempfield improves to 11-2 overall and 9-1 in the section. The Tigers will visit Norwin in their section finale on Monday afternoon.