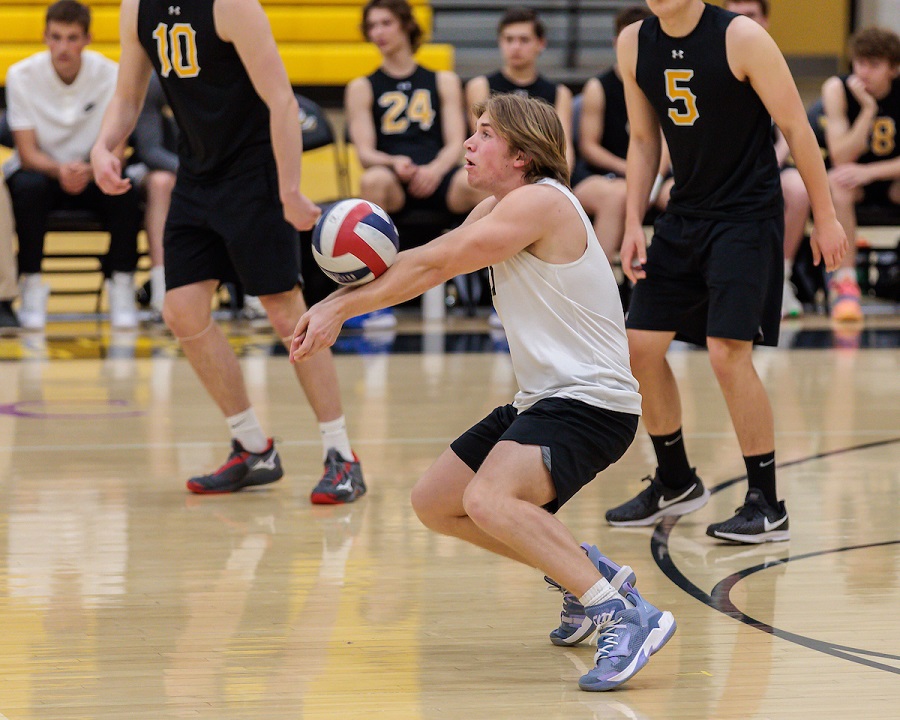 The North Allegheny boys’ volleyball team advanced to the state’s final four with a 3-0 sweep over section rival Shaler in the PIAA quarterfinals on Saturday afternoon at Gateway High School in Monroeville. The Tigers won by set scores of 27-25, 25-20 and 25-20.

North Allegheny rode the hot hand of senior Cole Dorn in the opening set and jumped to a 21-14 lead. However, following a Shaler timeout, the Titans stunned the Tigers by taking 10 of the next 12 points to grab a 25-24 advantage. Sophomore middle hitter Dante Palombo led the Shaler comeback bid with three kills and two blocks. Undaunted, North Allegheny scored three straight points on back-to-back kills by Dorn and a block by senior middle blocker Jack Birch to earn a hard-fought 27-25 win. Dorn finished with a game-high 18 kills on the afternoon.

Set two was deadlocked at 12-12 before the duo of Dorn and Birch took hold of the game. Dorn powered the Tigers with five kills and Birch added three kills and a block to give NA the victory, 25-20. Shaler’s Logan Peterson did his best to keep the Titans within striking distance with eight kills in the set. Junior Varun Kaveti tallied the final point in the set with a kill and totaled five on the day. Birch finished with 12 kills and three blocks, earning Wright Automotive Player of the Match honors.

The third set was knotted at 11-11 until the dynamic serves of senior Titus LaMay flummoxed the Titans. Including two aces, North Allegheny rattled off seven consecutive points for an 18-11 lead. From there, Shaler couldn’t recover as the Tigers rolled to a 25-20 win. LaMay, who was celebrating his birthday, turned the lights out on the Titans with three aces for a team-high 55 on the season.

Significant contributions were provided by junior outside hitter Jax Wilhite with six kills and senior setter Caleb Schall with a team-best 36 assists and four blocks. Senior libero Ryan Treser totaled 24 digs to set a new program single-season record of 504 on the year. The old mark was held by Ryan’s older brother, Trevor, who posted 503 digs in 2019.

North Allegheny improves to 16-1 on the season, while Shaler ends the season with a 13-6 mark. The Tigers advance to the PIAA semifinals to face Pennridge on Tuesday night at a site and time to be determined.