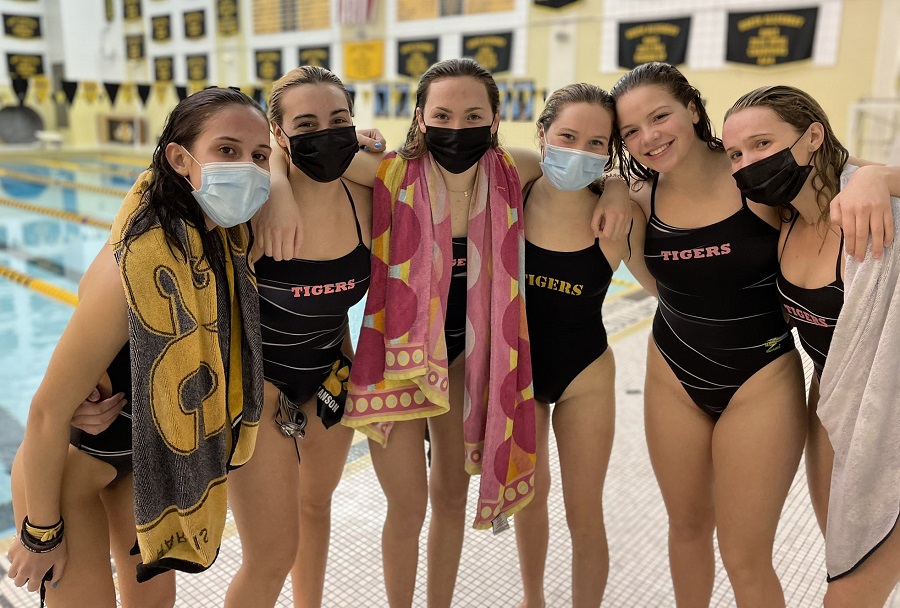 A week after opening the section with a win over Hampton on the road, North Allegheny looked to duplicate that feat at home as the Butler Golden Tornado paid a visit. The Tigers were able to do just that, as they remained perfect on the season by sweeping Butler.

The diving competition got the meet started with North Allegheny’s top three girl’s swimmers, as Christina Shi, Zoe Ky and Maya Ennis were not competing. On the boy’s side, Butler did not have any participants diving against the Tigers. With opportunities in front of them senior Jordan Richards and junior Eva Betz stepped onto the boards. For Betz, who finished third with a score of 190.65, it was her first competition of the season. But it was Maddie Whitewolf who took center stage. The sophomore, who has already qualified for the WPIAL 3A Championships, won with a score of 205.85. She was the only girl’s diver to break the 200-point mark. For the boys, sophomore Will Schenk and senior Lucas Rodgers continued their strong seasons by both eclipsing 200 points, Schenk with 231.85 and Rodgers with 202.15.

The boys swim team took to the pool next and the Tigers put on a very consistent performance despite some great individual efforts from Butler. Senior David Bocci and junior Ben Borvendeg both won two individual races and two relays and freshman Ben Grossman finished first in the 100-breast, but North Allegheny consistently took the second, third and fourth spots and finished with a 100-75 victory.

The North Allegheny girls were nothing less than spectacular in the nightcap, as they finished 1-2-3 in nine of the eleven races. Carissa Jones, Mikayla Tieppo, Madison Wasilco and Greta Mott finished at 152:32 to take the 200-medley. Rhode Island recruit Quinn Frost won the 200 free over teammates Isabella Dietz and Madeline Harris. The sophomore Lexi Sundgren touched first in the 200 IM. Ella Ogden’s time of 26 flat was tops in the 500 free and senior Olivia Kisow won the 100-fly. Kara Mihm got into the winning act with a time of 56:50 in the 100 free and then George Washington recruit Molly Smyers put on a show in the night’s longest race. The senior’s time of 5:07:63 was over 20 seconds better than second place in the 500 free. Dietz, Haley Miller, Kisow and Rebecca Melanson won the 200 free relay and Sundgren posted her second win of the evening by taking the 100-back. Mihm earned her second win in the 100-breast and the team of Dietz, Kisow, Frost and Mott posted a time of 3:44:25 to give the Tigers 11 first place finishes in all 11 races. The girls remained perfect by posting a 96-76 team score.

Congratulations to Maddie Whitewolf, Zack Jubeck and Kara Mihm as they earned honors as the Wright Automotive Players of the Meet. Whitewolf earned the win in the girls diving event and Jubeck’s thrilling win in the 200-yard freestyle was enough to earn him the honor. Mihm was the choice in girls swimming with individual wins in the 100-yard freestyle and 100-yard breaststroke and a relay victory in the 200-yard medley relay.

The Tigers are next scheduled for action on Thursday, Jan. 28 when they visit Pine-Richland for a section meet beginning at 6:00 PM.