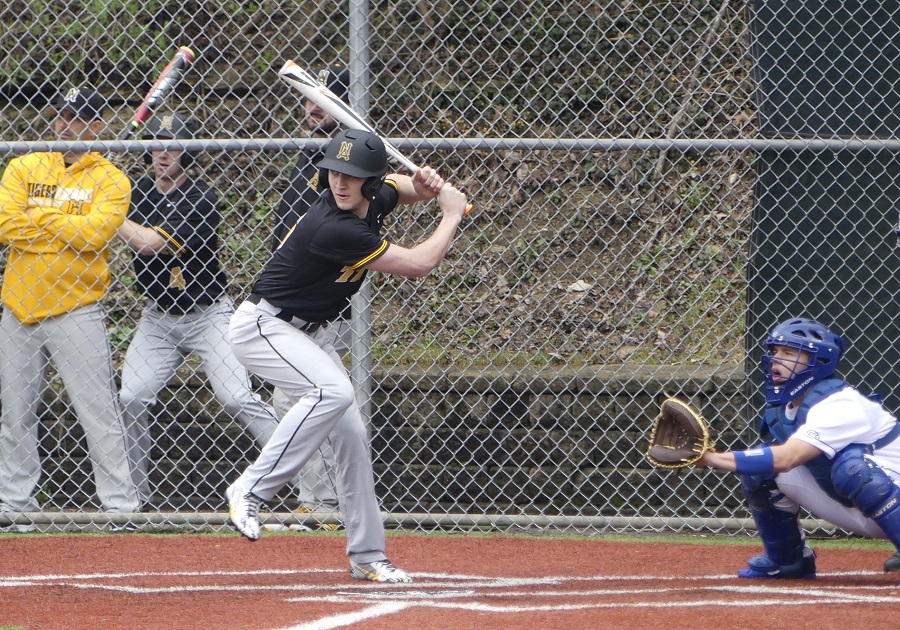 For the second straight game, the North Allegheny Tigers rallied from a one-run deficit in the seventh inning for a thrilling come-from-behind victory. On Tuesday afternoon, it was Mt. Lebanon who fell victim to the Tigers by a 5-3 decision in the south hills. Junior Luke Trueman helped spark the offense with a 4 for 4 performance at the plate. Trueman and senior Andrew Turzai drove home two runs in the win.

Mt. Lebanon struck for an early lead when Nick Callender singled home Mark Palmerine for a 1-0 lead in the bottom of the first inning. Blue Devils starting pitcher David Abbondanza silenced the Tigers through the first four innings before NA finally broke through against the ML bullpen in the sixth inning. With two outs in the top of the sixth, Turzai’s two-run single scored Trueman and senior Alex Mesaros to give North Allegheny a 2-1 advantage.

Mt. Lebanon struck back in the bottom of the sixth and regained the lead. Callender doubled in a run to even the score at 2-2 and Matt Delasandro’s RBI single put the Blue Devils back on top, 3-2.

The Blue Devils lead was short-lived as North Allegheny staged a comeback in the final frame. Senior Jack Lehew led off the seventh with a walk, junior Ben Surman followed with a double and senior Bobby Brown walked to load the bases with nobody out. A Mt. Lebanon error on a Colin Cain groundball allowed Lehew to score and the game was tied, 3-3. The Tigers continued to press the Mt. Lebanon bullpen and Trueman came through for a go-ahead two-run single to left field to put NA in front, 5-3.

North Allegheny reliever Caiden Wood pitched a scoreless bottom of the seventh for the save to finish of an exciting non-section triumph. Cain picked up the win in relief with 0.2 innings of work and two strikeouts. NA starter Danny Caropresi tossed 4.1 innings and allowed one unearned run in a no-decision. Mt. Lebanon’s Alex Zigarocich suffered the loss, permitting three runs in one inning of relief.

The non-section win improves North Allegheny’s record to 2-0 on the young season. Mt. Lebanon dips to 0-2 overall. The Tigers will host the Canon-McMillan Big Macs on Thursday at 4:00 p.m.