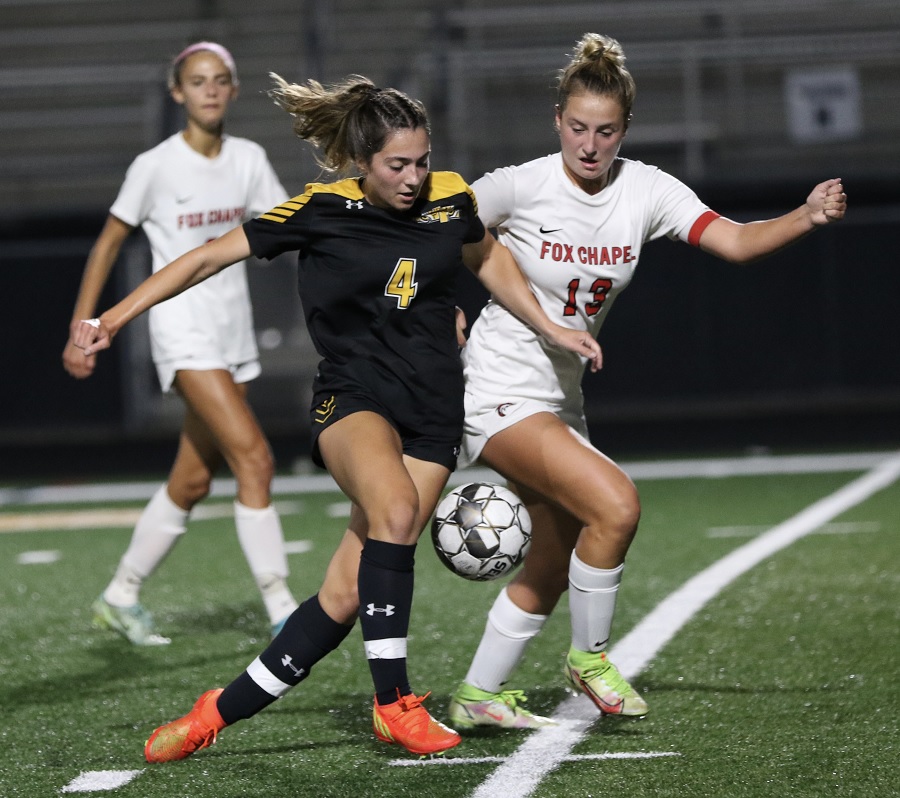 In a rematch of last year’s WPIAL quarterfinal, the North Allegheny girls’ soccer team earned a measure of revenge on Wednesday with a 5-0 win over Fox Chapel at Newman Stadium. A season ago, the Foxes stunned the top-seeded Tigers in penalty kicks, 1-0. In the rematch, NA’s prolific scorers touched the back of the net often for a win in Section 1-AAAA action.

The field was tilted in North Allegheny’s favor for much of the night, but several near-misses in the early going kept the game scoreless. Senior Lucia Wells had a chance that struck the crossbar in the 13th minute and later hit the left post with a shot in the 25th minute. The Tigers scored the first of the night with 5:09 left in the half when Wells struck a line drive shot that was initially saved by Fox Chapel keeper Gianna Patterson. However, senior Sophia Palermo pounced on the rebound and scored for a 1-0 lead.

Facing a short-handed Fox Chapel team that was without goalie Molly McNaughton, a Cal-U commit, and senior midfielder Makayla Mulholland, an Appalachian State commit, the Tigers capitalized and continued to dictate the pace in the second half.

Nearly two minutes into the second half, Wells threaded two defenders with a pass to junior Abigail Stager, who beat Patterson in a tight window in the goal box for a 2-0 advantage. Wells scored one of her own with 29:15 to play in the half for a 3-0 lead. The goal was the 11th of the season for Wells and the 61st for her career. For her efforts on the night, the University of Pittsburgh commit was tabbed the Wright Automotive Player of the Game.

The Tigers cashed in on a corner kick with 21:32 to play on a marker by junior Sam Braden for a 4-0 lead. Sophomore Kylie Dutkovich put the finishing touches on the victory with a blistering shot from 30 yards out that beat a leaping Patterson for a 5-0 lead. Junior goalie Natalie Rak made three saves, including a fine diving stop in the second half, for her third clean sheet of the season.

With the win, North Allegheny remains unbeaten with a 7-0 record and 5-0 mark in Section 1-AAAA. Fox Chapel slips to 4-3-1 overall and 2-2-1 in the section. The Tigers will host Norwin on Saturday at 2:30 p.m. The game will be broadcast live by the North Allegheny Sports Network.