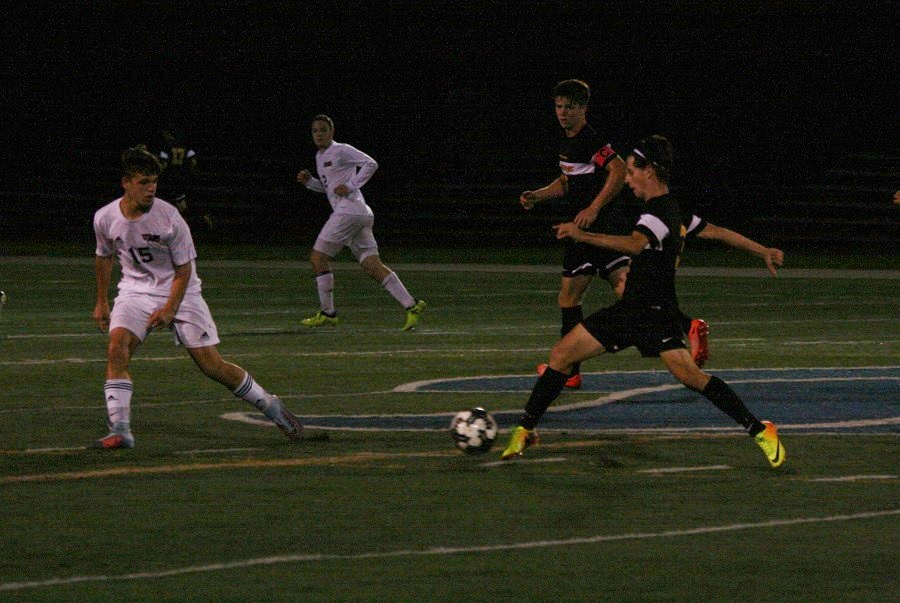 The NA Tigers won their second section game of the young season on Thursday night with a 2-0 victory over the Shaler Titans at Biles Field.

The Tigers overwhelmingly dominated the time of possession, so much so that Shaler did not register a shot on goal during the entire contest.  The Tigers, meanwhile, worked patiently to solve the Titans defense by shell -probing the wings and attacking with crosses from the corners in the first half.  Finally, the persistence paid-off at the 12:06 mark of the first half when Josh Luchini scored off a header set-up by Sean Atwater for a 1-0 lead.  The remainder of the half was more of the same but the Tigers were unable to add to the lead, ending with the Tigers holding a 6-0 advantage in shots and a 5-2 advantage in corner-kicks.

The second half was even more dominant for the Tigers but a resilient Shaler team played hard even though being outshot, 7-0. The Tigers defense meanwhile was strong the entire game as the starting back-line of Sam Neal, Ethan Schenk, Nick Williams and Luke Stephen allowed few opportunities.  The half was highlighted by the return to the field for the first time this year of defenseman Christian Giannetti, a key cog for last year’s WPIAL Championship, who recovered from an injury sustained over the summer.  The Tigers finished the night in style when Sam Buirge scored at 0:02 mark, knocking in a shot from inside the box off a feed by Atwater after hard-work by Zac Marzula and Luchini in the corner.

With the win the Tigers’ record improves to 5-2 overall and 2-0 in the Section.  The Tigers’ next game is Saturday at 7:00pm vs. Pine-Richland in a re-match of last years’ WPIAL semifinals and PIAA first round matches.  The contest will be broadcast live via the internet on the North Allegheny Sports Network.

Saturday is also Soccerfest at Newman Stadium with the festivities and games running all day so come out and support both the NA Girls’ and Boys’ soccer programs and root the Tigers on.