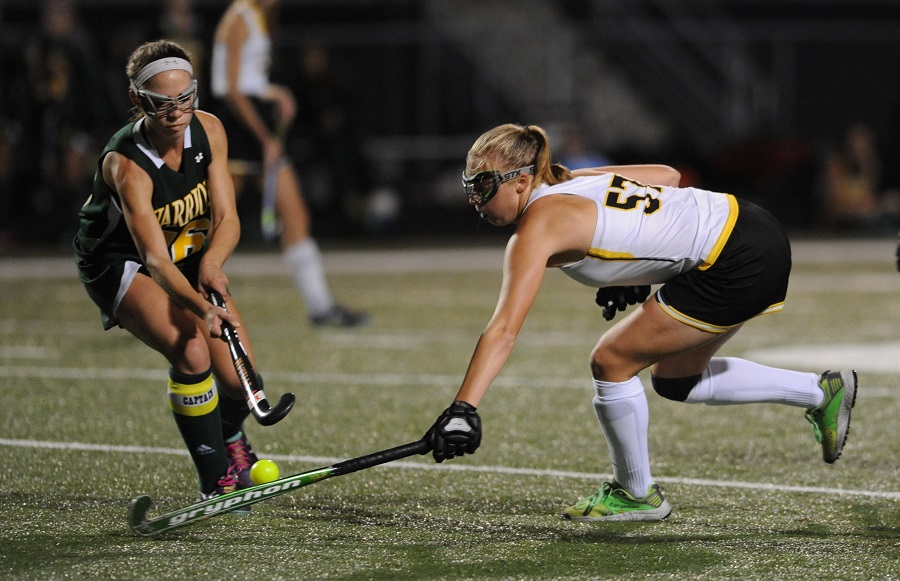 Junior Bridget Russell scored two goals to lead North Allegheny past the Penn-Trafford Warriors on Thursday night at Newman Stadium, 2-0. The victory secures a playoff spot for the Tigers in the Section 1-AAA standings. The Tigers can finish no worse than in a tie for second place with the Norwin Knights. Even though Norwin and North Allegheny split regular season meetings, the Tigers own the tiebreaker by virtue of head-to-head score differential.

The Tigers grabbed an early 1-0 lead against Penn-Trafford when Russell scored on a penalty corner less than four minutes into the game. The Tigers were 1 for 8 on penalty corners on the evening. The Warriors were 0 for 5.

In the second half, North Allegheny was granted another penalty corner opportunity 15 minutes into the half. While the corner rolled through the Tigers front line, Jenna Beam backed up the ball and sent it into the circle where Hailey Wachowiak uncorked a strong shot on net. Penn-Trafford goalie Sara Letham stopped the Wachowiak shot but left a rebound that was buried into the back of the net by Russell for a 2-0 lead.  Russell was named the Wright Automotive Player of the Game by the North Allegheny Sports Network.

Penn-Trafford nearly got back into the game with 9:20 remaining in the contest when the Warriors were awarded a penalty stroke. Emily Polakovsky took the shot for the Warriors but missed wide left and the shutout remained intact. NA goalie Emma Jorgensen completed the shutout and the Tigers captured a 2-0 victory and a playoff berth in the Class AAA playoffs.

North Allegheny improves to 10-5 overall and 7-2 on the season. Penn-Trafford falls to 4-5 in section play. The win is the 11th in a row by the Tigers in the head-to-head series with the Warriors. North Allegheny will visit Pine-Richland in the section finale on Monday night at 7:30 p.m. The game will be video streamed on a pay-per-view basis ($5.00) by the North Allegheny Sports Network and can be viewed by clicking here.