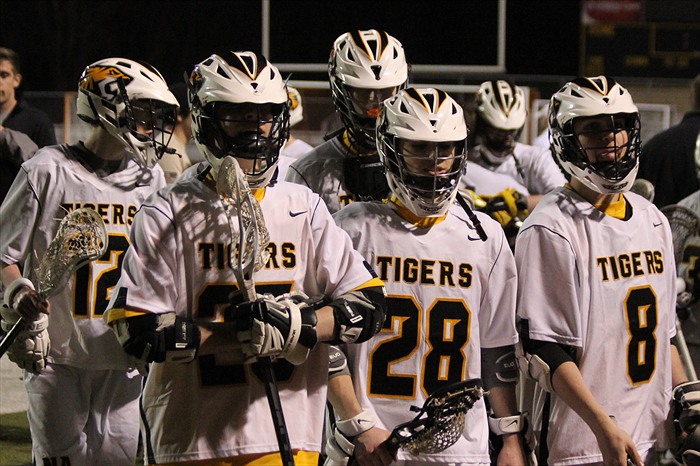 Two Tigers notched hat tricks as North Allegheny blistered the Butler Golden Tornado on Wednesday night, 12-6, in a WPIAL Division 1, Section 2 contest at Newman Stadium. Gavin Hagen led the Tigers with five goals and Dillon Dugan added four more in a rout over the Golden Tornado. With his five-goal night, Hagen was named the Wright Automotive Player of the Game.

North Allegheny opened the scoring with a pair goals from Dugan to take a 2-0 lead a little over one minute into the game. Butler answered back with a goal by Nico Cicco with 8:25 remaining in the first quarter, and Jake Lex tied game at 2-2 with a marker just 13 seconds later. North Allegheny grabbed the lead back with 2:42 to go in the period on a goal by Hagen to bring the score to 3-2, Tigers.

While Butler played North Allegheny tight in the first quarter, the black and gold wore down the Golden Tornado defense with a deliberate and physical attack in the second period. The Tigers exploded for six goals in the second quarter and took a commanding 9-3 lead into halftime. Hagen and Dugan scored two goals apiece in the quarter, while Matt Osten and Wes Powell added goals for NA.

North Allegheny maintained its sizable advantage in the third quarter and held a 12-4 lead thanks to two more goals by Hagen and another by Anthony Mauro. Butler tallied two meaningless goals in the remaining minutes to bring the score to a 12-6 final.

Filling in for an ill Ean Kuska, goalie Anthony Abbondanza played a fabulous game and stopped 10 shots on net. Abbondanza was aided by the defense of Greg Ferringer who racked up a team-high four forced errors, and freshman Antonio O’Barto who tallied three forced errors. Alec Vissotski dominated the faceoff circle by winning 12 of 16 draws and collected a team-best seven ground balls. Trevor Perry had five ground balls, while Ferringer and Peter Barrante had four ground balls apiece.