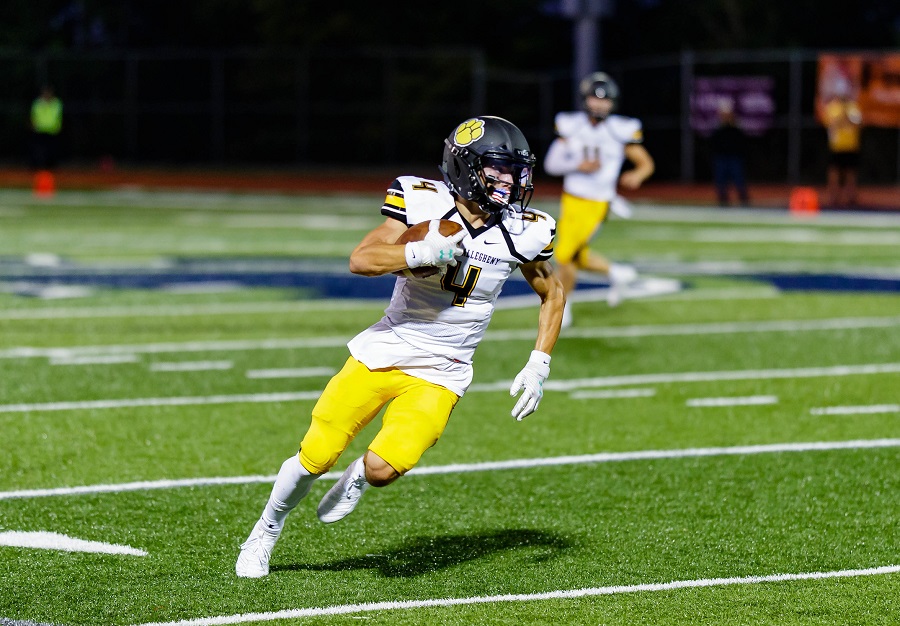 Tigers Bow Out Of WPIAL Playoffs With Semifinal Loss to Rams

The North Allegheny Tigers dropped a 49-14 decision to the Pine-Richland Rams on Friday night in the WPIAL Class 6A semifinals. Pine-Richland quarterback Cole Spencer passed for 361 yards and six touchdowns to lead the two-time reigning WPIAL champions back to Heinz Field.

The Rams took advantage of two first half fumbles by North Allegheny to take a 21-0 lead. Spencer’s first touchdown pass went to D’avay Johnson from 27 yards out and running back Luke Meckler added a 41-yard touchdown run late in the first quarter for a 14-0 lead. Meckler hauled in a 75-yard touchdown pass from Spencer with 11:11 to go in the second quarter to bring the score to 21-0, Rams. Meckler totaled 120 yards rushing on 12 carries.

North Allegheny was able to crack the scoreboard with 27 seconds to go in the second quarter when senior quarterback Ben Petschke tossed a 12-yard scoring strike to Luke Colella in the right corner of the end zone to trim the deficit to 21-7.

Unfortunately for North Allegheny, the Tigers could come no closer as Spencer tossed four more touchdown passes in the second half en route to a 49-14 Rams win.

For a wonderful four years at North Allegheny, including a 37-10 record and four straight appearances in the WPIAL semifinals, the NA senior class was named the Wright Automotive Players of the Game.

Pine-Richland improves to 10-1 on the season and advances to face the Central Catholic Vikings next week for the WPIAL Class 6A championship. North Allegheny’s season comes to an end with 10-2 record. Congratulations to Tigers, head coach Art Walker and the entire coaching staff for another outstanding season for the black and gold.