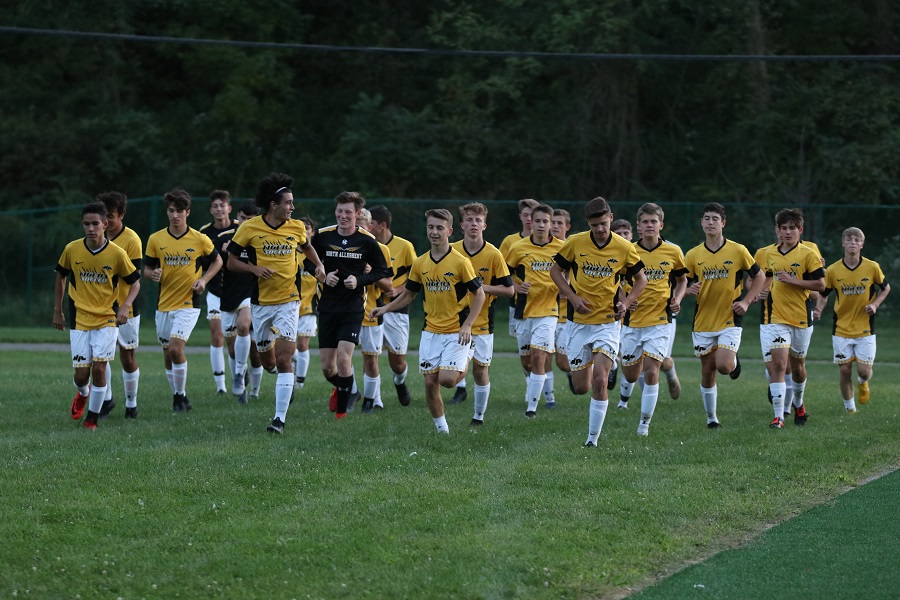 The North Allegheny boys’ soccer team faced off against Upper Saint Clair for the final regular season match.  A victory took extra time, two minutes and 40 seconds of it, before the Tigers claimed a 2-1 victory for the second consecutive overtime win.

The all senior starting lineup began controlling the match early with most of the play occurring in the Tigers end of the field.  However, at 26:58 remaining in the half, Panthers defender Devan Ekbote launched a rainbow from 40 yards out that found its way over the NA goalkeeper’s head, giving USC a 1-0 lead.  Multiple offensive opportunities were generated in the attack during the balance of the first half from seniors Luke Anderson, JD Runatz, Will Cinker, Justin Mericle, Bryce Boroughs and junior Kensley Owens, however, none were able to be finished prior to the half ending.

The second half began much as how the first half ended.  This time with senior Sam Maldia and sophomore Evan Cole, seeing his first varsity action of the season, adding to multiple opportunities for the offense that were still not finding the back of the net.  Solid defensive play by the Panthers back line and goalie protected their lead for the first 30 minutes of the second half.  That would soon end though as junior defender Max Kress played into the box a nicely hit direct free kick that appeared to be well defended and cleared by the USC defense. However, the rebound found junior defender Jonathan Swann, who hit a perfectly struck volley of a waist high ball that found the back of the net, top right, evening the score at 1-1.  The Tigers continued to dominate possession the balance of the way, with defenders Darien Sansosti, Owen Smith, Zoha Petersen, Samuel Giannetti and Kress quickly cleaning up several counter attacks from the Panthers, pushing the game to overtime.

In the overtime period, the Tigers struck quickly. Holding possession in the Panthers end for the entire OT, multiple chances were generated that had the USC defense reeling. With the clock showing 7:20 remaining, Cinker was working the left side of the attack, beat his defender while pursing the goal and was fouled in the penalty area.  He assumed responsibility of taking the penalty kick and cleanly finished the shot, dead center on net, as the Panthers goalie dove left, sending the cold Tigers and fans into their bus and cars to warm up and celebrate a 2-1 regular season finale victory during their drive home north.

The Tigers finish with a 11-6-1 record in the regular season and await the playoff brackets expected to be released on Wednesday.