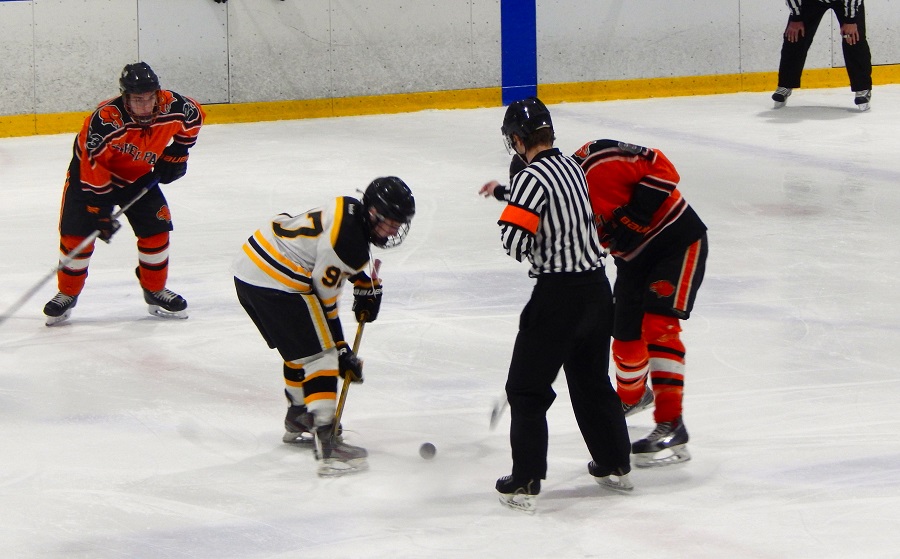 Senior Dawson Richard’s goal 4:12 into overtime lifted top-seeded North Allegheny to an exciting 3-2 win over the eighth-seeded Bethel Park Black Hawks in the PIHL quarterfinals. The last two playoff meetings between these two schools had been decided by just one goal, including a triple overtime win by Bethel Park over NA in the 2012 quarterfinals, and Tuesday night’s contest at the Baierl Ice Complex fit the mold. (Click here to watch a highlight of the game-winning goal by Dawson Richard.)

The upstart Black Hawks scored the game’s first goal when Jason Bauer got free for a breakaway and beat NA goalie Joe Hubert at the 3:18 mark of the first period. Bethel Park maintained its one-goal lead throughout the period despite a barrage of shots on net by the Tigers forwards. Black Hawks goalie Tre Lowe stopped 39 pucks in a terrific performance.  Hubert made 21 saves for North Allegheny, including a key stop in the early stages of overtime.

North Allegheny finally got to Lowe in the second period when Richard caromed a shot off of the BP net minder from a tough angle along the near boards and across the goal line to tie the game at 1-1 at the 4:08 mark of the period. Richard had another opportunity to score two minutes later when the Tigers were awarded a penalty shot because BP’s Jack Wagner was called for an equipment violation. Lowe denied Richard, however, and the game remained tied 1-1.

Bethel Park seemed to pick up the intensity following the penalty shot save by Lowe, but North Allegheny still managed to take a 2-1 lead on a goal by Nathan Taylor with 7:20 to play in the second. The Tigers’ lead was short-lived as Bethel Park’s Logan Chorney blistered a slap shot from inside the blue line to knot the score at 2-2 with 5:29 to go in the second period.

The game remained deadlocked until overtime when Richard’s heroics vaulted North Allegheny to the PIHL semifinals for the second straight season. Freshman Tyler Duderstadt played the puck from the left-wing circle and sent it in front of the net where Richard fought through traffic to deflect the game winning shot past Lowe for a 3-2 triumph. With two goals and one assist, Richard was named the Wright Automotive Player of the Game.

North Allegheny advances to play the Peters Township Indians in the PIHL semifinals on Wednesday, March 9 at the RMU Island Sports Center at 6:45 pm. The game will be broadcast live via the internet on the North Allegheny Sports Network.