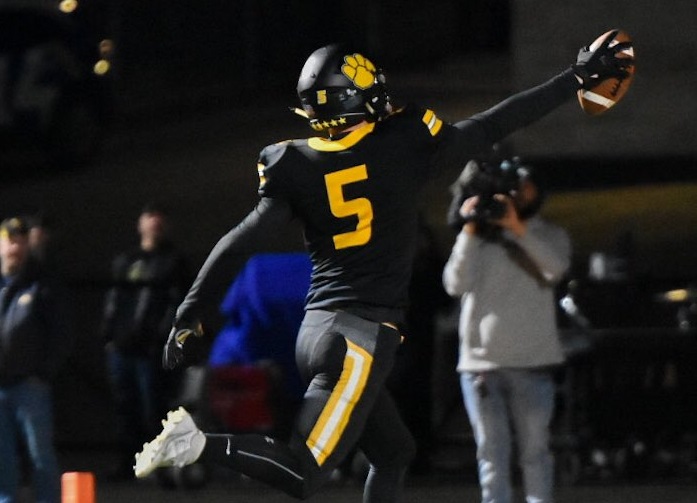 Sophomore quarterback Logan Kushner threw for three touchdowns and ran for another as North Allegheny buried the Canon-McMillan Big Macs on Friday night, 49-26, in the WPIAL Class 6A quarterfinals. Named the Wright Automotive Player of the Game, Kushner completed 8-of-13 passes for 260 yards and helped the Tigers reach the WPIAL semifinals for the sixth consecutive season. It’s the second time in the last three seasons that North Allegheny has defeated Canon-McMillan in the postseason.

North Allegheny wasted little time in gaining the early momentum thanks to an 80-yard scoring pass by Kushner to sophomore Khiryn Boyd on the first play from scrimmage for an immediate 7-0 lead. The Tigers continued to flummox the Big Macs defense with its play-action passing as Kushner tossed a 17-yard touchdown pass to wide-open tight end Daniel Sellers with 4:13 to play in the first quarter for a 14-0 advantage.

On the ensuing possession, Canon-McMillan put together a 9-play, 74-yard drive and was faced with a 4th and 2 at the NA 31-yard line. Big Macs quarterback Mike Evans hit junior receiver Austin Winkleblech on a slant for a 31-yard touchdown pass, cutting the Tigers lead to 14-6. The extra point kick was blocked.

In the second quarter, North Allegheny used an avalanche of points to take control of the game. With 10:31 on the second quarter clock, Kushner scored on a 1-yard QB keeper for a 21-6 lead. Kushner struck again for a long touchdown pass, this time finding a wide-open Connor Casten who hauled in a 66-yard strike for a 28-6 lead with 7:35 left in the second. Senior running back J.R. Burton added a 12-yard touchdown run with 4:34 left in the half to extend the advantage to 35-6.

The backbreaker for the Big Macs came with CM poised for a score with under a minute to play in the half. On a 2nd and goal at the NA 4-yard line, senior Kolin Dinkins intercepted an Evans pass and returned it 95-yards for a touchdown and a 42-6 lead with 42 seconds left before intermission.

On the opening kickoff of the second half, Canon-McMillan senior Anthony Finney returned the ball 84-yards for a touchdown to trim the NA lead to 42-13. Later in the period, senior running back Ryan Angott rushed for an 8-yard score to cut the deficit to 42-19. The extra point kick was no good.

With the mercy rule in effect to start the second half, the two third quarter touchdowns for CM were too little, too late. Burton scored on a 39-yard race to pay dirt with 1:48 left in the third quarter to extend the NA lead to 49-19. Angott closed out the scoring with 1:02 remaining in the fourth quarter with a 9-yard touchdown run to bring the final score to 49-26, Tigers.

Along with Kushner’s big night, Burton led the ground game with 12 carries for 126 yards and two touchdowns.

Canon-McMillan was paced by Winkleblech with seven catches for 187 yards and a score. Evans completed 12 of 30 passes for 216 yards, one touchdown and one interception.

With the win, North Allegheny improves to 7-4 on the season, while Canon-McMillan’s season ends with a 4-7 mark. The Tigers will visit top-ranked Mt. Lebanon next Friday night at 7:00 p.m. The game will be broadcast live by the North Allegheny Sports Network.