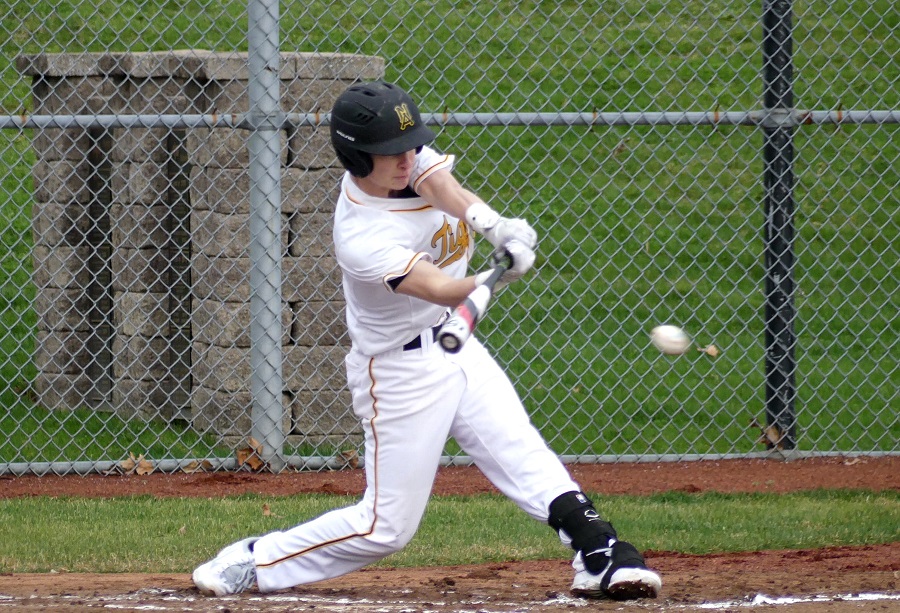 The North Allegheny baseball team won its fourth straight game to begin the 2017 campaign with a 4-2 non-section triumph over the Connellsville Falcons on Monday afternoon. Junior Luke Trueman collected a pair of hits in the victory, including an RBI single in the first inning that gave the Tigers a 1-0 lead.

Connellsville struck for two runs in the top of the third for a brief 2-1 advantage. North Allegheny responded quickly in the bottom of the third and started the inning with a leadoff single by senior Bobby Brown. An out later, Trueman singled to advance Brown to second base. Senior Alex Mesaros bounced into a fielder’s choice to put runners at the corners with two outs. Senior Danny Caropresi hit a ground ball that was misplayed by Connellsville’s second baseman, allowing Brown to cross the plate and tie the game at 2-2. NA continued to capitalize on Connellsville miscues as a wild pitch advanced Mesaros to third and Caropresi to second. Shortly after, a passed ball allowed Mesaros to score and the Tigers led, 3-2. Junior Juliano Capretta extended the inning with a walk and Justin Hamm followed with an RBI double, expanding the NA advantage to 4-2.

Senior Andrew Partridge started the game for the Tigers and tossed three innings, allowing two runs while striking out three batters. Following NA’s three-run bottom of the third, head coach Andrew Heck turned to the bullpen which provided four innings of scoreless baseball. The triumvirate of Julian Klein, Caropresi and Brown allowed only two hits to silence the Falcons down the stretch. Brown picked up the save, his first of the season.

North Allegheny vaults to 4-0 overall, while Connellsville slips to 0-2. The Tigers are slated to host Penn-Trafford on Tuesday evening. First pitch is slated for 6:30.