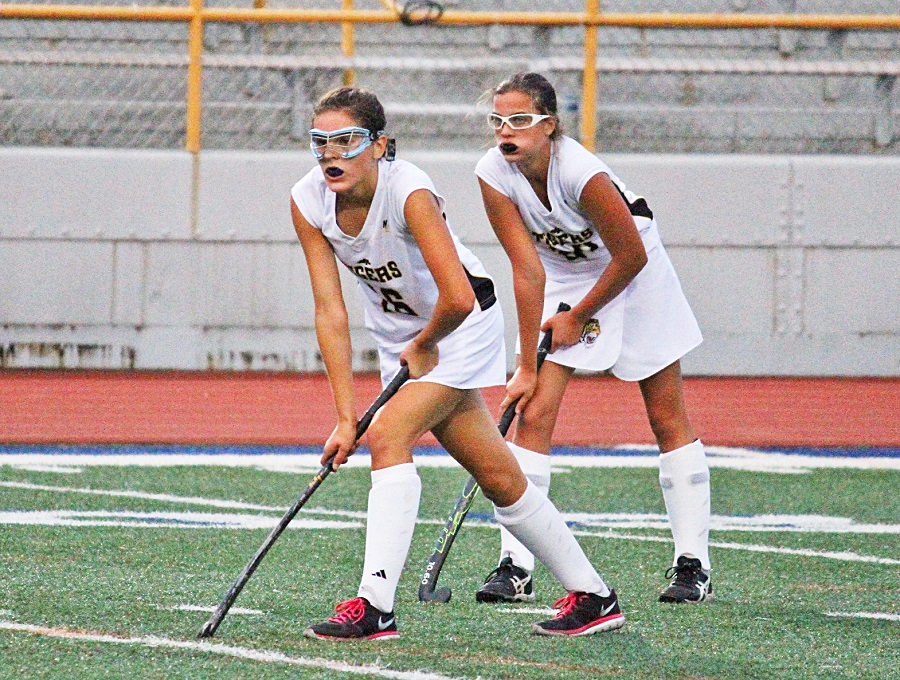 The Lady Tigers handed the Wildcats from Novi, Michigan their first defeat of the season, with a score of 5-2 on Friday night in a game scheduled on the turf at Mt. Lebanon High School. The match was fast and furious, as both teams played a strong passing game and relied on their ability to intercept each other’s passes and change the direction of play.  The teams were even throughout much of the first half, though NA created more scoring chances than their opponent, eventually culminating in a Tiger goal on a penalty corner late in the half.  Seniors Kailey Vogl and Hannah Downing would connect to give the Tigers the 1-0 lead when Vogl inserted the ball and Downing drilled it past the Novi goalie from the top of the circle.  The Tigers were awarded 8 penalty corners in the half, while also amassing seven shots on goal, which compared favorably to Novi’s two penalty corners and one shot on goal.  Senior Isley Smith registered the lone Tiger save, and the half would end with the Tigers up 1-0.

The Tigers took another 7 shots in the second half, resulting in four additional goals. However, Novi was able to penetrate the Tigers defense several times, taking 6 shots on sophomore net minder Katie Shideler and being awarded 6 penalty corners to NA’s 3.  The offensive push would pay off for Novi, as they were able to tally their first goal with 10 minutes left in regulation, but that was after NA had already scored three more goals of their own and had a solid command of the scoreboard.  After working the ball into the Novi end several times in the first ten minutes of play, the Tigers would tally their second goal of the game when Vogl passed the ball down the left alley to junior Maddy Snyder who took off, dribbling over 40 yards and backhanding a shot toward the net.  The ball was tipped by sophomore Brooke Cameron and misplayed by Novi’s goalie and defender, trickling over the goal line.  Shortly thereafter, Downing stole the ball and feathered a pass to Snyder who was moving just beyond the Novi defense.  Snyder sent a wrist shot into the net to put the Tigers up 3-0.  Only a moment later, senior Megan Guzzardi took possession of the ball and raced it down the right sideline, passing to Jessica Brandon who crossed the ball to a wide open Vogl, where she scored from the left post.  Novi would score two goals on penalty corners late in the game, but Shideler would register 6 saves on 8 shots to squelch Novi’s offense.  NA would rally with their final goal when Brandon brought the ball in from the right sideline and sent a backhand pass across to Snyder, who pushed it past the goalie for her second goal of the night.  The Tigers 5-2 win was aided by the strong defensive play of senior Kendra Downey.

The next Tigers games are on Saturday morning at 10:30 against Hudson, and then the section rival game at Pine Richland on Monday evening at 7:30 (jv 6:00.) Fans are especially encouraged to attend the Pine Richland game and cheer on the Lady Tigers to a win, which will keep them undefeated in section play halfway through the season.