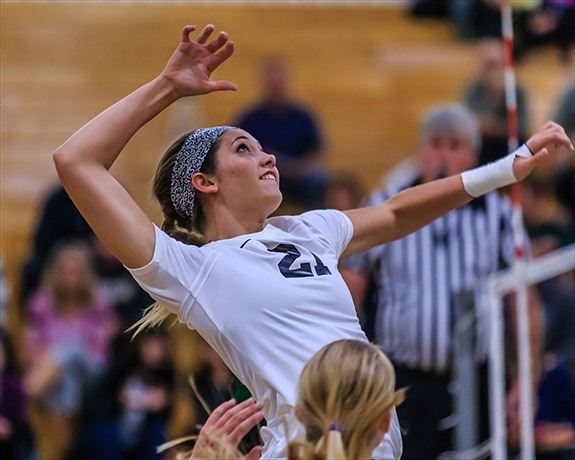 Making their third straight appearance in the WPIAL championship, the North Allegheny girls’ volleyball team dropped a five-set heartbreaker to the reigning champion Baldwin Highlanders, 3-2, on Saturday night. It was a rematch of last year’s exciting five-set contest and a standing only room crowd at Baldwin again witnessed an exciting five-set title tilt as the Highlanders rallied for the win. Baldwin claimed the title by set scores of 21-25, 25-18, 14-25, 25-22 and 15-12.

Despite the high decibel level at Baldwin, the Lady Tigers were unfazed and opened the match with a 25-21 set victory. Seniors Lauren Swartz and Mattie Taggert recorded five and four kills, respectively, to pace the Tigers. It was the beginning of a phenomenal performance by both players as Swartz finished the night with a team-high 14 kills, and Taggert collected 12 kills and numerous blocks at the net.

Baldwin jumped out to a 7-1 lead and controlled set two for a 25-18 win. After splitting the first two sets, North Allegheny seemed to seize control with a thorough 25-14 win in the third set. The Tigers were hitting on all cylinders and carried that momentum into the fourth set for a 20-17 lead. The resilient Highanders fought back to tie the score at 21-21 thanks in large part to three kills by junior Maddi Sgattoni. The Tigers appeared to have taken the lead back on a would-be kill by Taggert, but the officials did not see the ball hit the fingertips of the Baldwin front line and ruled the ball out of bounds, giving the Highlanders the point and a 22-21 lead. The crucial missed call by the officials turned the tide of momentum and Baldwin rode the wave to a 25-22 win and forced a decisive fifth set.

Sgattoni, who finished the night with a match-high 18 kills, helped lead Baldwin to the win in set five, 15-12, and a second straight WPIAL championship. It is the WPIAL 11th title in Baldwin program history.

Despite the loss, the Lady Tigers played valiantly and had several outstanding performances. Along with Swartz and Taggert, Maria Mosbacher, Lexi Kotrick and Annika Chang came through for big swings, and libero Erin Carmody played well defensively. Again quarterbacking the NA attack, and helping maintain the team’s composure when adversity struck, was senior setter Beth Muhlenkamp. Muhlenkamp was named the Wright Automotive Player of the Game by the North Allegheny Sports Network.

North Allegheny falls to 18-1 following the loss. Both Baldwin and North Allegheny have qualified for the PIAA playoffs which begin on Tuesday night. The Tigers will play District 6 champion State College at 6:00 pm at Central Cambria High School in Ebensburg, PA.