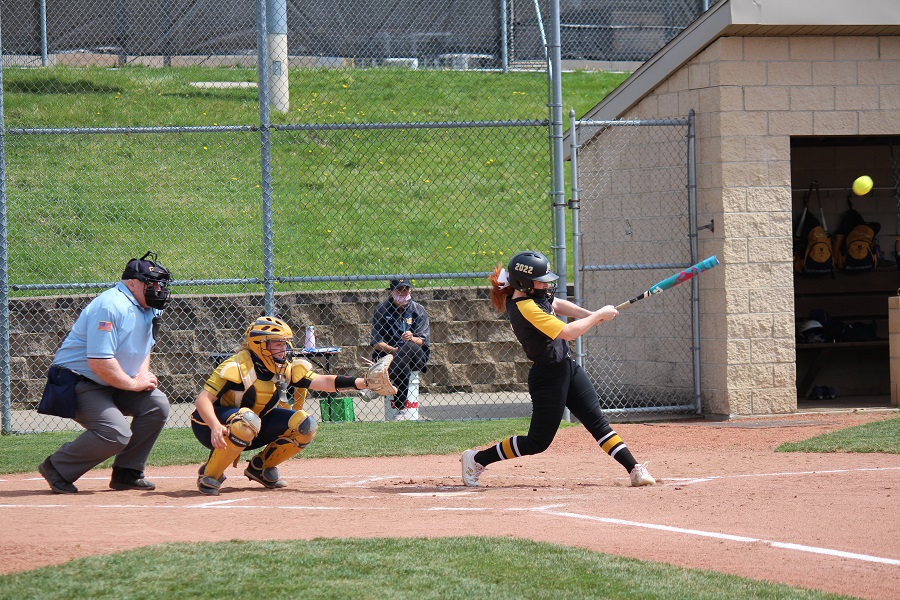 Coming off an exciting section opening win the night before on the road against Seneca Valley, North Allegheny fell behind Mt. Lebanon early and broke a 4-4 tie in the bottom of the fourth inning to score a 5-4 win at home over Mt. Lebanon (4-3) on a gorgeous sun splashed afternoon in Wexford.

Tigers starter Anne Melle recorded the first two outs in the top of the first before the Blue Devils strung together two singles, a walk, two passed balls and another base hit to lead 2-0. North Allegheny would take the lead with four runs in the bottom of the second inning.

Annalyn Isaacs reached on an error and Megan Manesiotis was hit by a pitch. Freshman Caitlin Logan drove in her first run of the season, plating Isaacs with a single. Fellow 9th grader Carlyn Vaupel would follow suit on the first RBI’s, driving home Manesiotis and Logan with a double. After two outs and with Vaupel on third, Meghan McDonough drove in her first run of 2021 with a single to put the Tigers up 4-2.

Mt. Lebanon would answer back in the top of the third. After a lead off single was erased by a double play, Elizabeth Kubancek and Olivia Buckiso would single and pitcher Kate Borza drove home Kubancek with a base hit. Sammi Phillips was hit by a pitch and Grace Goodin singled to tie the game at 4-4. Coach Morgan Vescovi went to the mound to replace Melle, who had pitched a pair of complete games during the week including last night vs. the Raiders, with Alaina Whipkey. That move turned out to be the difference maker for the Tigers. Whipkey got Iris Barone to fly out on one pitch to end the threat.

North Allegheny would retake the lead in the bottom of the fourth with an unlikely source and a familiar name doing the damage. After one out, freshman Rachel Rusnica, who came into play shortstop when Whipkey took the circle, doubled to right center for her first hist of the season. After a ground out. McDonough hit a tapper to third and used her speed to beat the play. As the first baseman was searching for the bag, the ball got past her allowing Rusnica to score and the Tigers led 5-4.

Whipkey then stole the show the rest of the way. The junior would retire four straight batters before allowing a lead-off single in the fifth. That hit was erased on a double play. Whipkey set down seven consecutive batters before Deirdre Flaherty roped a two-out double off the fence in left field. But Whipkey would fan Kubancek, who had two hits on the afternoon, to end the game and earn the win for the Tigers.

With her tremendous relief effort, Whipkey earned her first win of the year and the Wright Automotive Player of the Game honors. Her final pitching line was 4 and 1/3 innings, 2 hits and three strikeouts.

The Tigers have won two-straight to improve to (3-4) on the season and North Allegheny will return to section play on Monday night when they host Norwin. The Tigers and the Knights get underway at 7PM and the game will be broadcast live via the internet on the North Allegheny Sports Network.