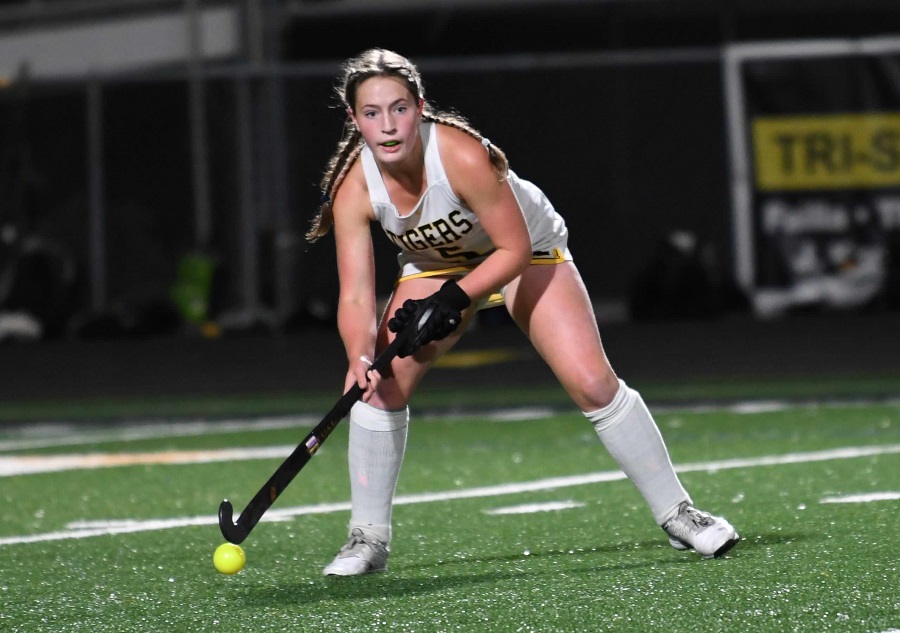 In the regular season finale on Wednesday night at Newman Stadium, the North Allegheny field hockey team played a hard-fought contest against the top-ranked Pine-Richland Rams and dropped a narrow 2-1 decision in Section 1-AAA action.

North Allegheny weathered the early storm from the undefeated and two-time reigning WPIAL champions thanks to the play of goalie Jordan Ashbaugh. The junior netminder turned away Louisville commit Rylie Wollerton with a blocker save with 4:25 remaining in the first period, and two subsequent rebound opportunities for the Rams, to keep the game scoreless. Five minutes into the second quarter, Wollerton drove a hard and high reverse chip shot on net and again Ashbaugh made a leaping stop to maintain the deadlock.

In addition to Ashbaugh’s acrobatic saves, junior midfielder Callie Rautenbauch slowed Pine-Richland’s high-powered offense throughout the night with numerous well-timed tackles and aggressive defensive play. For her efforts, Rautenbach was selected as the Wright Automotive Player of the Game.

Despite NA’s stingy defense, the Rams were able to score the game’s first goal on a penalty corner late in the second quarter. With just one minute left in the half, Wollerton scored on a rocket shot from the right side of the circle for a 1-0 lead.

Offensively, North Allegheny wasn’t able to put much pressure on Pine-Richland in the first half but that changed in the third quarter. Freshman Reagan Russell played a ball off the foot of a PR defender in the circle to earn a penalty corner. On NA’s first penalty corner of the night, sophomore Tanvi Challa scored her third goal of the season with a shot that ricocheted off the left post, then off the body of Rams goalie Sadie Baratka, and across the goal line to tie the score at 1-1 with 8:45 remaining in the period.

The contest remained deadlocked until the early stages of the fourth quarter when Wollerton blistered a shot from just inside the top of the circle that found the back of the net. Wollerton’s second marker of the night gave Pine-Richland a 2-1 lead with 12:20 to play.

In a dramatic finish, North Allegheny drew one last penalty corner as time expired. With no time on the clock, the Tigers’ final penalty corner of the game produced a shot that narrowly missed to the right and Pine-Richland prevailed, 2-1.

Pine-Richland was 1-for-8 on penalty corners and North Allegheny went 1-for-3. Ashbaugh made 11 saves for the Tigers, while Baratka stopped two shots to earn the victory.

Following the outcome, North Allegheny slips to 11-7 overall and concludes section play with an 8-4 record. Pine-Richland remains undefeated with a 15-0 record and claims the section title with a 12-0 mark. Both teams prepare for the WPIAL playoffs, which begin next week.