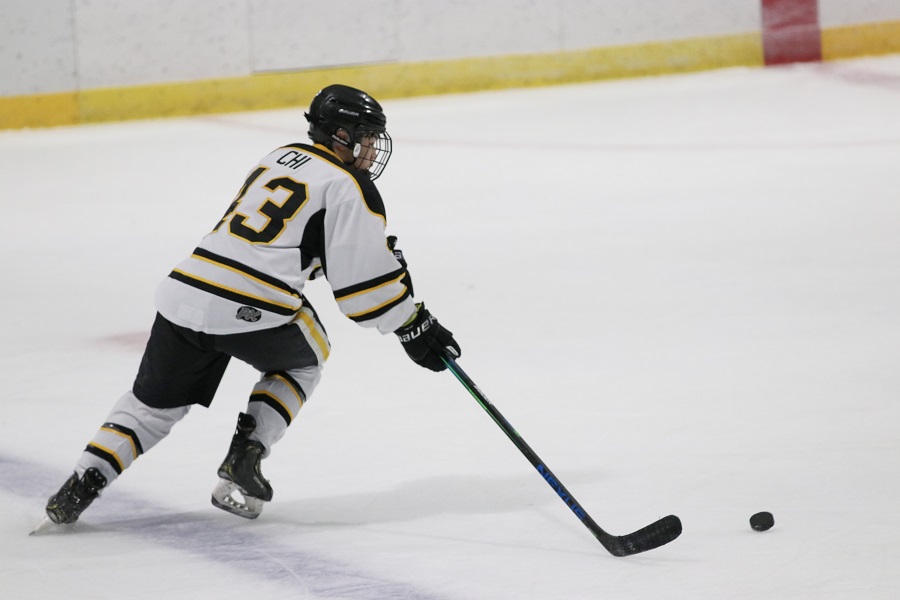 North Allegheny trailed 4-1 midway through the second period before fighting their way back to a 6-5 overtime win Monday night against the Mt. Lebanon Blue Devils at the Baierl Ice Complex.

The game started competitively with both teams playing very tough defense. North Allegheny controlled the puck but weren’t able to get many shots back. Midway through the period Mt. Lebanon flipped the momentum and finally broke through when Henry Supp was able to find a loose puck in a scrum in front of the NA net and bury it to give the Blue Devils the opening goal and a 1-0 lead. North Allegheny responded late in the period when a three-on-two rush developed. Nolan Colinear took a shot that deflected off of Mt. Lebanon goalie Austin Martin and onto the stick of A.J. Peterson, who finished on the doorstep and tied the game, 1-1.

Mt. Lebanon exploded out of the gates in the second period, outshooting North Allegheny, 17-7, and getting goals from Brady Conrardy, Marcus Simmonds and Nolan Lynman to give themselves a seemingly comfortable 4-1 lead with nine minutes remaining in the period. The Tigers picked up another late goal when Peterson dashed through the Blue Devil defense and finished for his second goal of the game and seventh goal of the season. North Allegheny did gain momentum heading into the final stanza but still trailed 4-2.

The Tigers flipped the script on the Blue Devils controlling the game from the opening face-off. Matt Irvin scored nine minutes into the frame to cut the score to 4-3, Mt. Lebanon. After drawing a tripping penalty, Connor Chi cashed in on the power play, putting home a loose puck in front and the game was all tied 4-4 with 2:18 remaining in regulation. Chi wasn’t done there and scored just 54 seconds later to give the Tigers a 5-4 lead. It was Mt. Lebanon’s turn to get a late goal when with 24 seconds left, Ryan Gates’ shot from the blue line was redirected by Simmonds into the NA net and we were headed to overtime with the score deadlocked, 5-5.

Playing 3-on-3 in the overtime period gave North Allegheny a lot more space on the ice and a chance to use their team speed. Chi took full advantage, taking a shot from the point and scoring top shelf with 17 seconds left in overtime to give himself the hat trick and win the game for the Tigers, 6-5. For his efforts, Chi was named the Wright Automotive Player of the Game.

Josh Bailey came into the game in relief and got the win by making 12 saves. Rylan Murphy started the game and made 17 saves.

North Allegheny improves to 6-1-0 with 12 points and remain in first place in PIHL AAA. The Tigers are back on the ice on Tuesday when they head south to take on Peters Township at the Printscape Arena in Southpointe at 9 p.m.