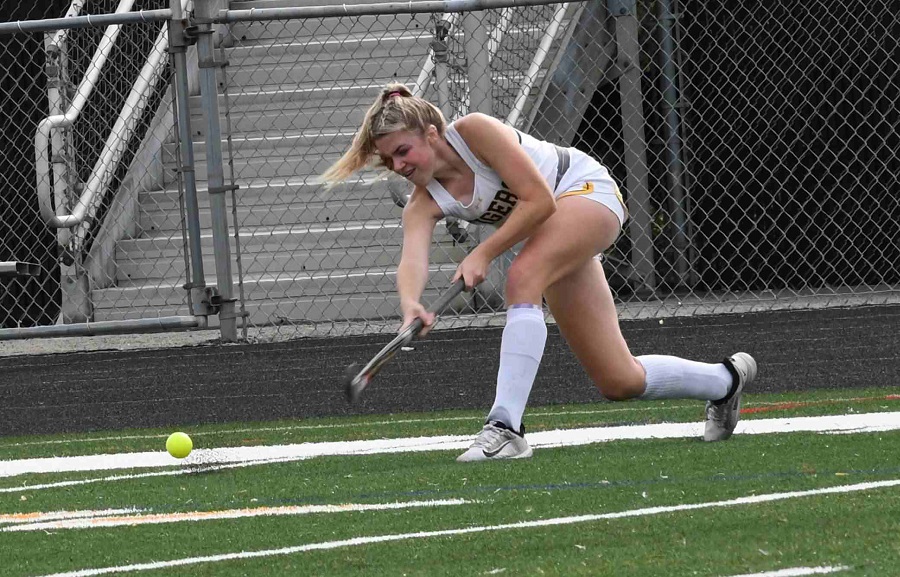 North Allegheny and State College met in the season opener for the fourth time in the last five years on Saturday and the Tigers dropped a 5-2 decision to the visiting Little Lions in a non-section game at Newman Stadium. The Tigers went toe-to-toe with the reigning District 6 champions but three unanswered goals by the Little Lions in the second half helped decide the outcome.

In the first quarter, State College sophomore Victoria Castano broke the ice for the 2022 season with a goal with 8:43 on the clock. Just over four minutes later, North Allegheny evened the score at 1-1 when senior Lauren Kampi feathered a pass to senior Mila Prusak for a one-timer that was rocketed into back of the Lions’ net.

With 6:51 to play in the second quarter, the Little Lions regained the advantage on a goal by senior Maddy Shomo, assisted by Olivia Miller, and State College held a 2-1 lead at the half.

The Tigers wasted little time in the second half in finding the equalizer as junior Isla Abrams raced down the left wing and passed to a wide-open Josie Schomburg in the circle to even the score at 2-2. The goal by Schomburg came just 1:10 into the third quarter. For her efforts on the day, Schomberg was named the Wright Automotive Player of the Game.

As was the trend on the day, State College answered back and took a 3-2 lead on Shomo’s second marker of the game with 5:01 left in the third period.

Twice it appeared that NA might tie the game once moore but an alert play by senior goalie Molly Schreiner denied a breakaway for Abrams in the circle, and later in the third quarter, Prusak was stopped on a great defensive save on the goal line by senior Madi Gaul.

North Allegheny senior goalie Jordan Ashbaugh got the start and played well through the first three quarters. Sophomore Kayla Joyce stepped in between the pipes for the fourth quarter and made a spectacular diving save to help keep things close. Despite NA’s best efforts, State College pulled away in the final stanza on a goal by Miller and a third by Shomo to secure a 5-2 win on a hot and sun-splashed afternoon in Wexford.

Following the season-opening defeat, North Allegheny will host Fox Chapel in another non-section game on Tuesday night. The contest will be broadcast live by the North Allegheny Sports Network.