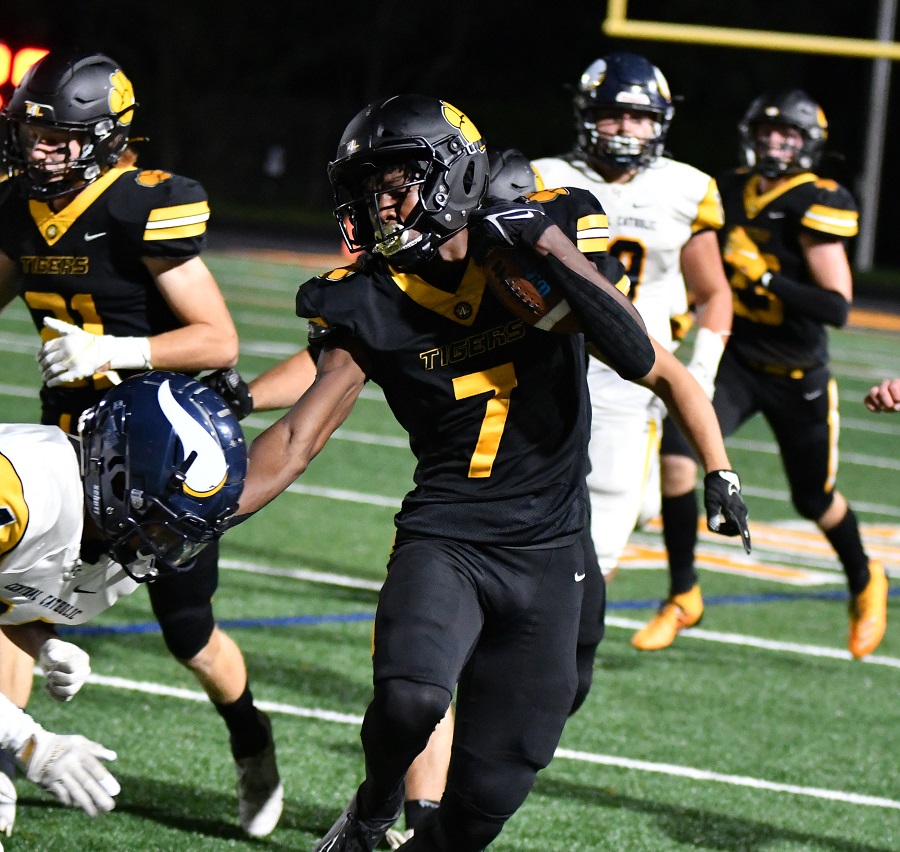 In a rematch of last year’s Class 6A championship game, the North Allegheny Tigers dropped a 24-7 decision to the Central Catholic Vikings on Friday night at Newman Stadium. Central Catholic senior running back Gannon Carothers rushed for 164 yards and two touchdowns on 33 carries to propel the Vikings to victory.

After a three-and-out by each team to open the first quarter, Central Catholic took its second possession 70 yards on 10 plays and culminated the drive on a 3-yard touchdown run by Carothers for a 7-0 lead. Following a Tigers punt, the Vikings used a 17-play, 76-yard drive that was spearheaded by the running of Carothers for another score. With a third-and-goal from the NA 2-yard line, sophomore quarterback Peyton Wehner scored on a bootleg for a 14-0 lead with 9:34 remaining in the second quarter.

In need of a spark, the Tigers got one on their next possession. On a 3rd and 21 from the Tigers own 9-yard line, Central Catholic’s Donavan Hinish tackled NA quarterback Logan Kushner on a would-be sack by his facemask, which gave the Tigers new life because of the penalty. Instead of punting, North Allegheny converted on a 3rd and 9 when Kushner tossed a 17-yard pass to receiver Cole Dorn for a first down. On the very next play, senior running back Kolin Dinkins raced down the right sideline for a 62-yard touchdown run, trimming the Central Catholic lead to 14-7 with 7:20 left in the first half. Dinkins added eight tackles on defense in a terrific all-around performance for the Tigers.

For the remainder of the half, North Allegheny held Central Catholic in check. The Vikings’ ensuing possession following the Dinkins touchdown ended on a sack by senior Jacob Porter, and with less than two minutes left in the half, NA defensive back Kyrell Hutcherson nearly tied the game with a pick-six when he jumped a pass by Wehner. Unfortunately, Hutcherson couldn’t quite hang on to the would-be interception and the score remained 14-7, Vikings, at the half.

North Allegheny started the second half with the football and another chance to tie the game. However, a Tigers fumble at midfield was recovered by Central Catholic’s Robinson Waddell in the first 47 seconds of the third quarter. The Vikings converted the turnover into a 43-yard field goal by Matt Schearer for a 17-7 lead with 7:57 remaining in the third quarter.

From there, Central Catholic fended off North Allegheny with its stingy defense and proficient running game. In the fourth quarter, Carothers grinded down the clock and put the finishing touches on the contest with an 8-yard touchdown run with just 1:44 left in the fourth quarter to bring the score to its eventual final, 24-7, Vikings.

North Allegheny TigerVision named sophomore linebacker Tyree Alualu the Wright Automotive Player of the Game for posting eight tackles on defense and a 29-yard run on a fake punt in the second half.

Following the loss, North Allegheny slips to 3-2 overall and 1-1 in the Quad County Conference in Class 6A. Central Catholic improves to 4-1 overall and 2-0 in the conference. The Tigers look to bounce back next week with a tough road game at Mt. Lebanon.