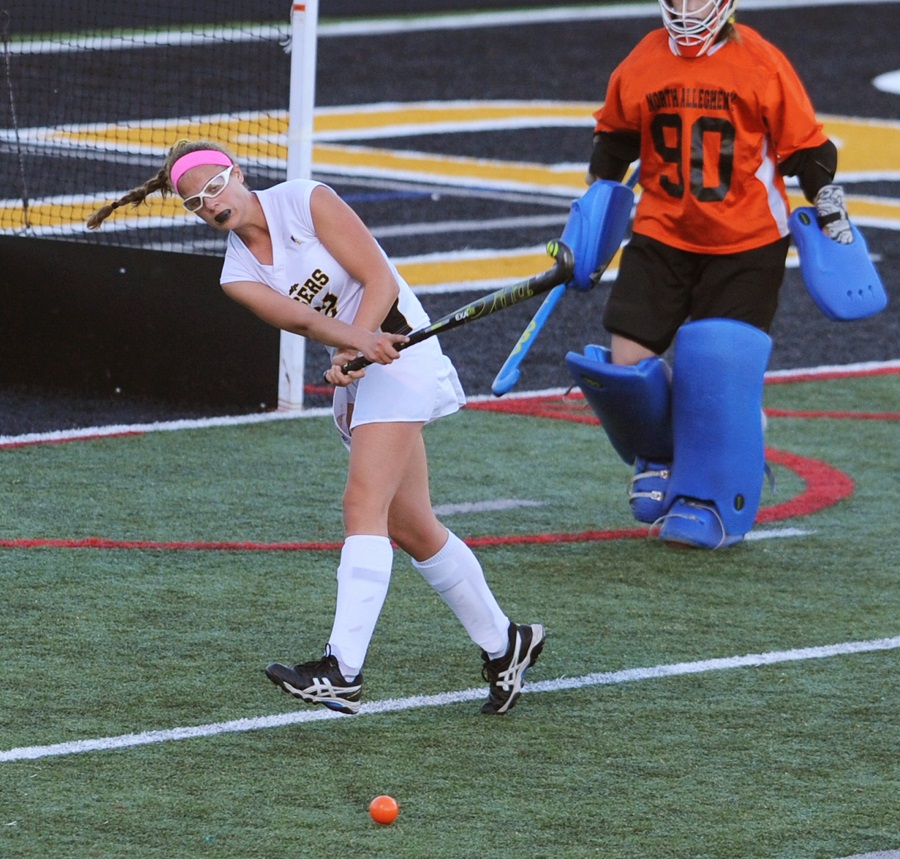 The NA Lady Tigers hosted defending WPIAL champion Fox Chapel in a non-section game on Monday evening. It was the first time the two teams met since the Foxes beat the Tigers 2-0 in last year’s championship game. Fox Chapel defeated the Tigers in Monday’s battle at Newman Stadium, 3-1.

The Foxes forced the action early, drawing a penalty corner a mere thirty seconds into the game. But the Tigers defense was up to the challenge, thwarting the corner and changing the momentum of the game.  After that first stop by senior goalie Rena Israel, NA settled down and took control of possession for the better part of the first half.  Led by their strong midfield tandem of senior Brooke Cameron and sophomore Bridget Russell, the Tigers attacked the Foxes with long passes and carries upfield, putting a surprised Fox Chapel on the defensive.  But the Tigers were unable to convert their early opportunities in the circle.  By the midpoint of the first half, the Foxes regained their footing, and they forced another penalty corner at the 13:01 mark of the first half.  This time, junior midfielder Abby Pitcairn converted, giving Fox Chapel a 1-0 lead.  The Foxes extended their lead to 2-0 with 6:30 left in the half, when Pitcairn scored again on a penalty stroke.  Despite the 2-0 deficit, NA finished the half strong, with solid defensive play from junior defender Jenna Beam and sophomore midfielder Laura Schwendeman.

The Tigers came out aggressively in the second half, once again taking their play to the talented Foxes. Just 48 seconds into the half, NA drew a penalty corner, and Cameron blasted a shot on net that was deflected in by senior forward Erin Coran.  The goal made the score 2-1 Foxes, and the crowd sensed a possible upset.  NA kept the pressure on throughout much of the second half, as sophomore winger Angie Genter continued her stellar play with long runs up the right wing and long crosses into the circle.  And when Fox Chapel threatened, senior goalie Katie Shideler was up to the task, turning away the first five shots she faced.  Unfortunately, the sixth shot was not the charm, as Pitcairn completed a hat trick making the score 3-1 Foxes, which is how this one would end.

Despite the loss, the Tigers played their most complete game of the season. As they head into their final three games of Section play, they stand one game behind Pine Richland and can clinch a playoff spot with a win over Penn Trafford on Thursday.  Game time is 7:00 pm (JV at 5:30 pm).