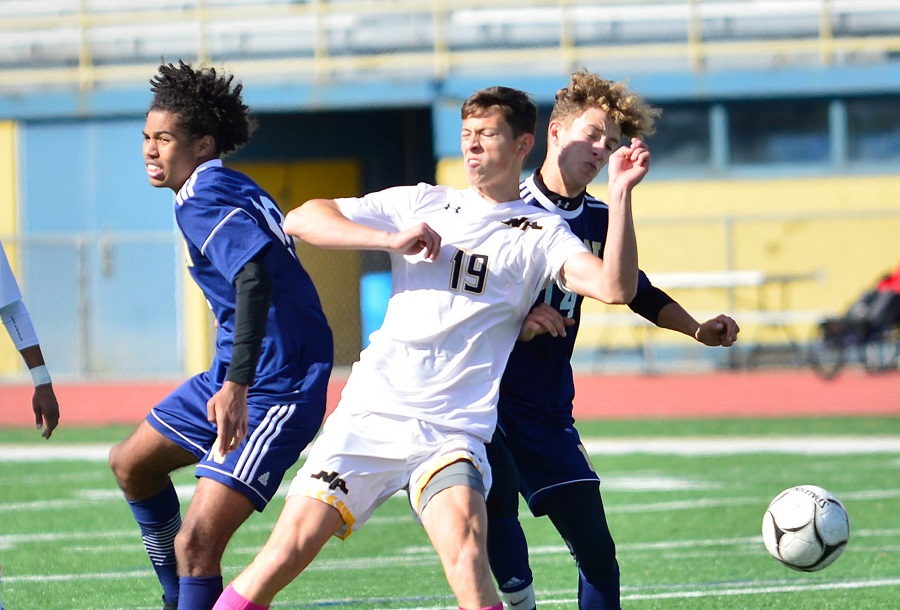 After a strong road start by North Allegheny, the Tigers gave up four straight goals to the Norwin Knights, eliminating NA from the playoffs with a 4-1 score.

In the first half, the Tiger offense broke a scoreless tie on a fastbreak into enemy territory. Senior Kensly Owens took a feed into the near corner and slid a quick pass from a sharp angle to fellow senior Will Stasko in the box, who headed the ball into the net past Norwin goalkeeper Andrew Yanez with 26 minutes remaining in the first for a 1-0 lead. Roughly six minutes later, the Knights took advantage of a handball committed by the Tigers in their own goal box following a corner kick. Junior striker Caleb Yuricha found the back of the net on a free kick less than ten yards from the goal line to make it a tie game, 1-1. With 11:36 remaining in the half, junior midfielder Riley Zimmerman gave Norwin a 2-1 lead, catching senior goalkeeper Mikkel Hindsbo a good distance out of the net as he tried to cut off Zimmerman’s move towards the goal.

The second half was all Knights, as Yuricha found twine once again with 34:45 remaining on a one-on-one opportunity into the offensive zone for a 3-1 lead. Norwin capped off the 4-1 win with a dribbling shot off the foot of senior Brendan Ash from 15 yards away that just snuck past senior goalkeeper Regan Racicot, who played the entire second half in net.

The Wright Automotive Player of the Game was awarded to senior Will Stasko for his efforts on the offensive side of play throughout the match.

The Knights stay undefeated on the season and advance to take on Seneca Valley in the 4A semifinals Wednesday night. Meanwhile the Tigers’ season comes to a close with a 13-4-1 overall record.