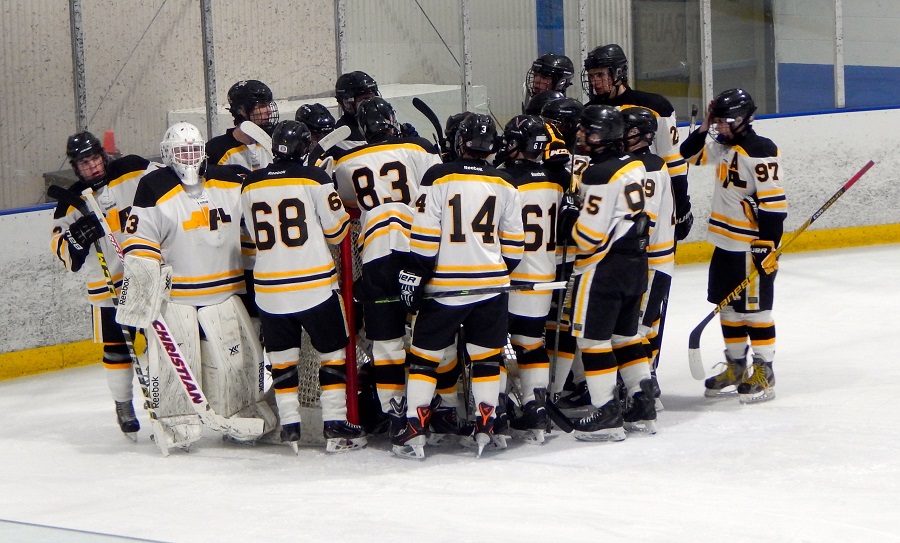 North Allegheny came another step closer to catching first-place Peters Township with a thrilling 3-2 victory over the Indians on Tuesday night at Southpointe. The Tigers seventh win in a row pulls NA to within one point of Peters Township in the Class AAA standings with four games to play. The Indians have only three games remaining in the regular season.

Tuesday night’s battle at the Iceoplex was scoreless through two periods thanks to the work of NA goalie Douglas Wild and PT goalie Caden Shell. Wild made 30 saves in the victory, while Shell stopped 24 of 27 shots.

After intermission, North Allegheny finally cracked Shell for the game’s first goal on a marker by Joseph Zappia 36 seconds into the third period. Peters Township tied the game at 1-1 at the 5:31 mark of the third on a goal by Will Barnes, but NA responded with back-to-back goals by Erik Chidester for a 3-1 advantage. The Indians made things interesting when Barnes scored his second goal of the game with 3:50 remaining in the game, but the Tigers held off Peters Township in the waning minutes for an important 3-2 triumph.

North Allegheny improves to 11-4-1 on the season and will host Seneca Valley on Thursday night in a game that will be broadcast live on the North Allegheny Sports Network. Faceoff is slated for 8:00 pm. Peters Township falls to 10-3-4 overall following the loss.