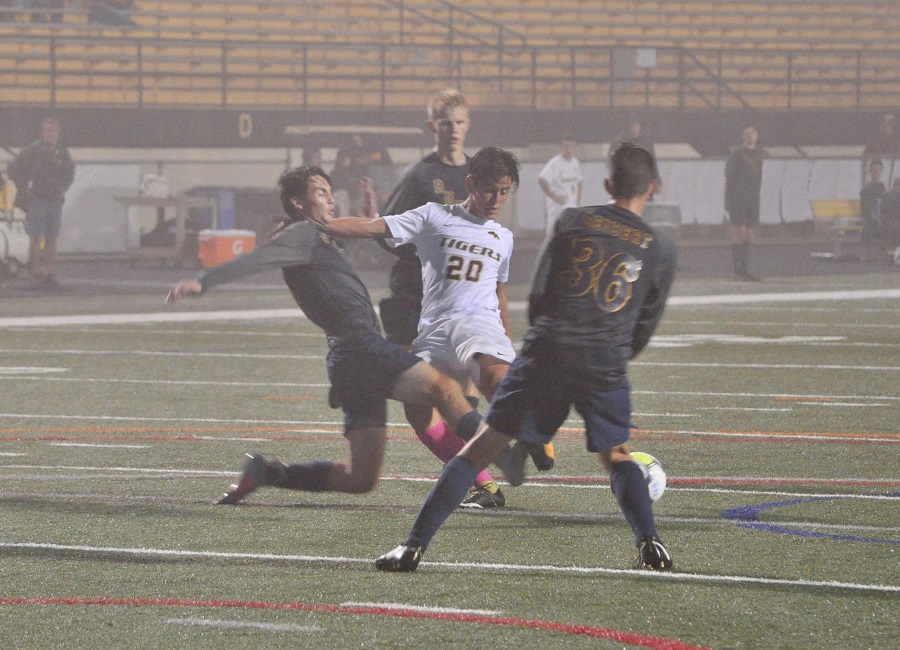 On a damp and foggy night at Newman Stadium the NA Tigers defeated the Butler Tornado, 3-0.

The Tigers struck first on a goal by Cam Yurick at the 34:56 mark, assisted by Josh Luchini for a quick 1-0 lead.  The Tigers spent the rest of the half thwarting the Butler attack.  Led by the defensive back-line of Stanley Owens, Luke Stephen, Nick Williams and Christian Giannetti, the Tigers didn’t allow a single shot by Butler in the first half.  Meanwhile, Butler keeper Andrew Chwalik made two spectacular saves on shots by Luchini to keep the score 1-0 at half.

The second half saw the Tigers open up the attack as they continued to generate strong scoring chances against the Tornado defense.  They broke through at the 33:54 mark as sophomore Jonathan Ross took a pass from Luchini and sent a low, driving shot into the Butler net.  The pressure didn’t abate and at the 22:34 mark Yurick scored his second goal of the game off an assist from Sean Atwater.  The Tigers defense and keeper Grant Glorioso held strong and preserved the shutout for a 3-0 final.

The Tigers’ Section 1 AAAA record now stands at 8-0-1 and their overall record at 12-2-1.  The next game is the last remaining section game, away against North Hills, next Tuesday at 7:00 pm.