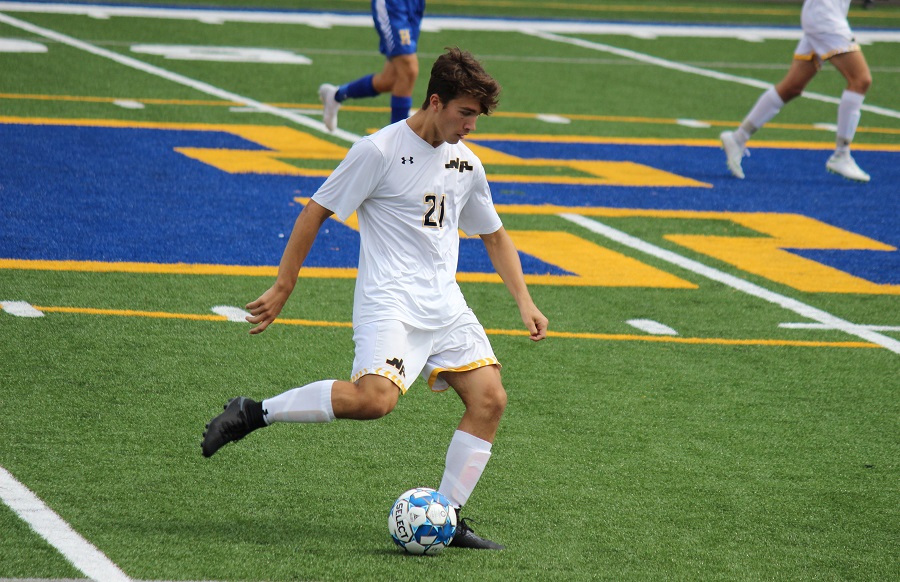 The Tigers traveled to Cupples Stadium in the heart of the South Side to take on the Taylor Allderdice Dragons on Tuesday night.  It was a thrilling game that saw the Tigers pushed to the limit in a 3-2 double overtime victory.

The game started off slowly for the Tigers in the first half.  Early on, NA was called for a foul in their penalty box, resulting in a penalty shot goal for Allderdice and a 1-0 lead for the Dragons.  The Dragons kept the pressure on NA for most of the first half of the game.  There was some back and forth, but Allderdice was dictating play.  With seventeen minutes left in the half, a giveaway in the NA end led to another goal for the home team a 2-0 lead for Allderdice.

At this point, things did not look good for the Tigers but NA regrouped and started to slowly turn the tide of the game.  With sixteen minutes left in the half, Will Cinker barely missed a shot over the crossbar.  Just minutes later, he attempted another shot that was saved by the Allderdice goalkeeper.  Sophomore striker Evan Anderson kept the NA momentum going with an apparent goal, but it was called back on an offsides play.  Then, with five minutes left in the half, junior midfielder William Stasko ripped a shot from 20 yards out that was ticketed for the upper left corner of the goal. The shot was saved by the Allderdice keeper but the momentum had swung in favor of the Tigers going into half time.

The Tigers continued applying pressure to start the second half, but couldn’t bury a shot in the net.  Matt Van Kirk directed a sliding shot just wide on a great individual play.  Finally, with 27 minutes left in the second half, Anderson crossed a ball to Bryce Burroughs, who converted the opportunity to cut the Allderdice lead in half at 2-1.  Three minutes later, NA was awarded a corner kick that eventually lead to a Cinker bar down goal to the tie the game at 2-2.  It is his third goal on the young season.

NA continued applying pressure to the Allderdice defense.  Another Cinker shot was pushed wide by the Dice keeper, which lead to an NA corner.  It looked like NA would get the lead as the ball was played in the box nicely and ping ponged around, but the ball was played out before the NA forwards could bury the shot to get the lead.  With the clock winding down in the second half, the NA defenders had tightened up the defense and were not allowing any real pressure on the NA goal.  At this point, it looked like a low shot by Anderson would be the game winner.  However, the shot missed narrowly wide right.  Regulation time ended with the score tied 2-2.

As the ten-minute overtime began, NA kept dominating possession.  With the NA defense limiting any opportunities for Allderdice, it seemed like a win was inevitable.  Anderson and Cinker both had chances that nearly missed.  The first overtime ended with the game still deadlocked at 2-2.

The highlight of the night came in the second overtime with 3:56 left.  Cinker crossed a ball to Anderson, who crossed up the defender with nice moves and buried a left-footed shot for the game winner and a 3-2 victory.