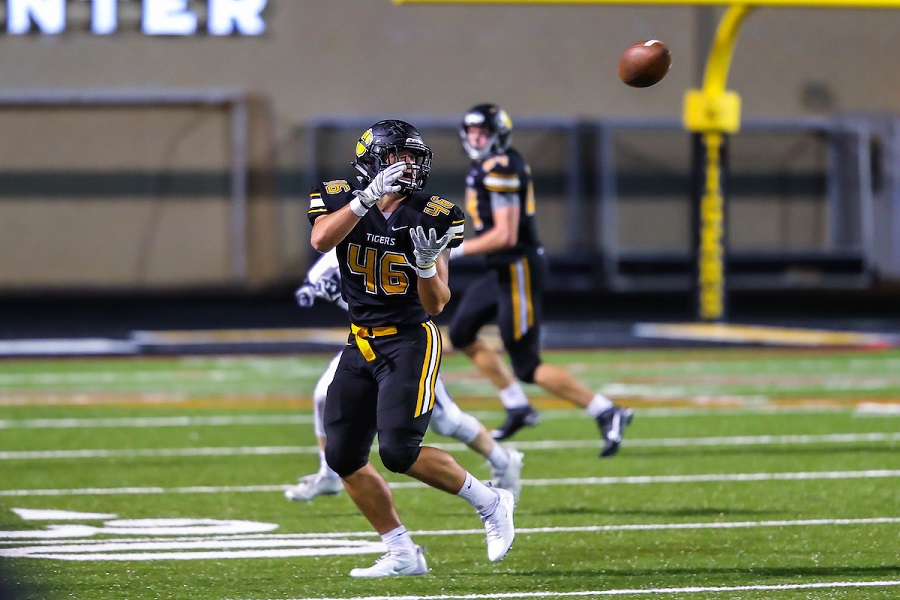 North Allegheny survived two late turnovers and a fourth-quarter rally by Penn Hills for a 28-21 victory on Friday night. Despite a turbulent final quarter played in a driving rain storm, the Tigers broke a 21-21 tie thanks to a 52-yard touchdown run by Ethan Maenza to take a home a road victory in the Northern Seven Conference. Maenza finished the night with 160 yards rushing and three touchdowns.

On the first play from scrimmage, Maenza raced 75 yards for a touchdown to give the Tigers a 7-0 lead. Penn Hills marched 41 yards to the NA 13-yard line on the ensuing possession but defensive back Niko Mermigas thwarted the drive by intercepting a Cam Tarrant pass in the end zone for a touchback.

The Tigers forced another turnover early in the second quarter when senior Tim Smith coughed up the football at the Penn Hills 35-yard line that was recovered by NA’s J.Q. Littlejohn. Two plays later, North Allegheny scored on a 2-yard touchdown run by Maenza for a 14-0 advantage.

The Penn Hills high-flying offense was finally able to crack the scoreboard with 2:16 to play in the second quarter on a 4-yard touchdown run by Tarrant on jet sweep to cut the NA lead to 14-7. The Indians had a chance to tie the game before intermission and began a drive at their own 36-yard line with 1:11 remaining. Penn Hills drove to the NA 17-yard line before turning the ball over on downs, keeping the score at 14-7, Tigers, at the half.

The bend-but-don’t-break approach on defense was a consistent trend for North Allegheny on the night. The Tigers were outgained in yardage, 317-283, but limited the Indians on third and fourth downs. Penn Hills converted only 4 of 13 third-down attempts and were just 2 of 6 on fourth down conversions.

After a scoreless third quarter, it was the defense that again stepped up with a big play. Mermigas intercepted a Tarrant pass and returned it 32 yards to the Penn Hills 11-yard line. The Tigers offense converted the gift into a touchdown, courtesy of an 8-yard rushing score from Tyler White for a 21-7 lead with 8:35 remaining in the game.

Penn Hills went nowhere on its next possession and was forced to punt the ball back to the Tigers. The game seemed to be at hand as NA had control of the ball and was grinding out yards and time off of the clock. However, at the Penn Hills 30-yard line, North Allegheny fumbled the snap from center and the loose ball was scooped up by the Indians’ Tyler Blue and returned 70 yards for a touchdown to cut the score to 21-14, Tigers, with 6:09 remaining in regulation.

North Allegheny’s next possession ended in similar fashion, with a fumble that was recovered by the Indians Rick Squires at the NA 33-yard line. The Indians drove to the Tigers 3-yard line and were faced with a fourth and goal. Penn Hills converted on a jet sweep left by Tim Smith for the game-tying touchdown and evened the score at 21-21 with 2:56 remaining.

With the game in the balance, the Tigers offense answered the call and ripped off a 52-yard touchdown run by Maenza for a 28-21 lead with 2:38 to play. The final gasp for the Indians ended in disaster as back-to-back sacks by Ryan Langdon and Josh Lugg, and an interception by Matt Binz finally ended Penn Hills’ comeback hopes. On a night that was keyed by the defense, linebacker Ryan Langdon was named the Wright Automotive Player of the Game, racking up 11.5 tackles and 1.5 sacks.

North Allegheny improves to 5-2 overall and 3-1 in conference play. Penn Hills slips to 3-4 overall and 2-3 in the Northern Seven Conference. The Tigers host Seneca Valley next week.