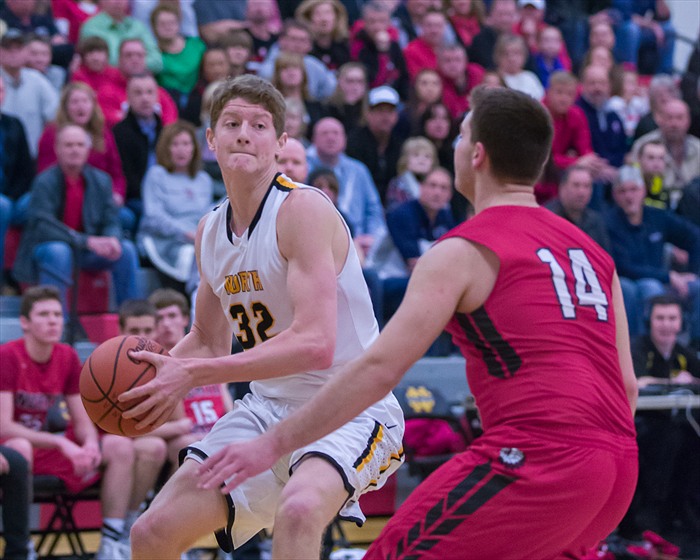 The North Allegheny boys’ basketball team advanced to the second round of the PIAA playoffs for the third straight season as the Tigers earned a hard-fought victory over the North Hills Indians on Saturday afternoon, 65-57.  The Tigers and Indians split their regular season meetings with each team winning on their own home floor, but in the rubber match at Cardinal Wuerl North Catholic High School it was North Allegheny who came out on top.

These neighborhood rivals traded jabs in a see-saw first half with the lead changing hands numerous times. North Hills’ senior Ryan Burek was hot from beyond the arc in the first half and poured in three 3-pointers to help the Indians keep pace with the Tigers. Sophomore Nick Smith and senior Kindahl Taylor added six points apiece in the first half as the Indians and Tigers were deadlocked, 30-30, late in the second quarter.

North Allegheny started an 8-0 run in the late stages of the second quarter to take a 38-30 lead in the opening minutes of the third period.  North Hills jolted the Tigers with an 11-2 run that was capped on a lay-up by senior Andrew Vojtko to pull the Indians ahead, 41-40.  The lead was short-lived for North Hills as NA responded with an 11-0 run that was sparked by guard Cole Constantino.  The talented senior scored eight points in the run, including two 3-pointers, to give the Tigers a 51-41 lead. Constantino finished with a game-high 26 points, five rebounds and five steals to earn him Wright Automotive Player of the Game honors.

The 11-0 run by the Tigers proved pivotal as the Indians never regained their footing and trailed for the remainder of the afternoon. During the game-changing run, freshman Curtis Aiken drained a 3-pointer on his way to a nine point performance. The Tigers were also aided by the efforts of senior Jordan Lake who tallied nine points and four blocks.

North Hills did its best to chip away at the Tigers’ lead but didn’t quite have enough to overtake its rival in a heated fourth quarter. The Indians were paced by Smith who notched a team-best 17 points.  Vojtko scored 12 points, Burek followed with 11 points and Taylor chipped in with 10.  Smith and Taylor were in foul trouble much of the day and ultimately fouled out in the waning minutes.

With the win, North Allegheny improves to 24-3 overall and advances to the PIAA second round to face the Harrisburg Cougars on Wednesday night at a site and time to be determined.  The game will be broadcast live via the internet on the North Allegheny Sports Network.  North Hills concludes the year with a record of 13-12.