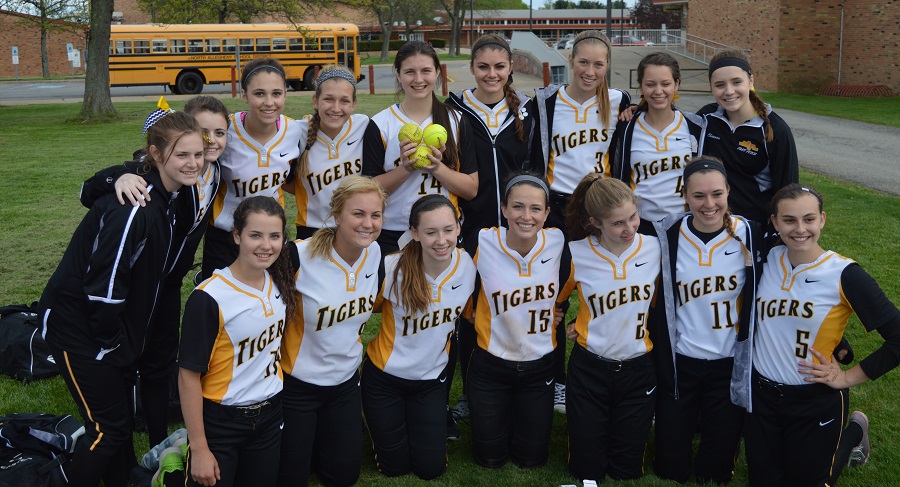 The North Allegheny Varsity Softball Team traveled to Butler High School on Tuesday afternoon and returned home with an impressive 13-0 victory. North Allegheny jumped on Butler with fifteen hits, highlighted by a three home run / seven RBI performance by freshman shortstop Rachel Martindale. Martindale went deep in innings one, three, and five to stake NA to a 7-0 advantage.  The Tigers added six more runs in the top of inning number seven to arrive at the final margin.

Also getting multiple hits for NA were sophomore left fielder Anna Pilotta with a two-for three day; senior catcher Liz Scherer who was three for five including a double; senior pitcher Madi Beining who went three for five; and senior second baseman Lacey Hilderbrand at two for four. All sixteen Tigers participated in the win, with Beining going the first six innings to pick up the win, and freshman pitcher Brooke Serbin throwing a scoreless seventh. The win raises the Tigers overall record to fourteen wins and one loss and their Section 3AAAA mark to 11-1.

Following the game, the team continued its annual tradition of supporting the Butler Dairy Queen by being treated to a variety of cones, sundaes, and Blizzards, thus ending a full and filling day.

Next up for NA is a home game against the Shaler Area Titans at NASH Softball Field on Wednesday evening, with the first pitch scheduled for 7:00 PM.