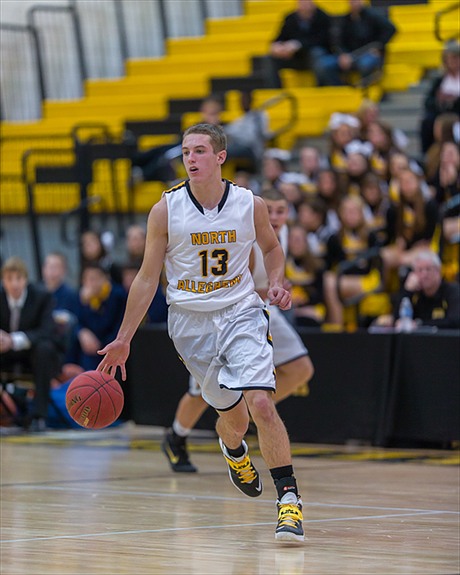 North Allegheny jumped out to a 13-0 lead and never looked back Friday night, cruising to 83-45 section triumph over visiting Butler. The Tigers shot better than 52 percent from the field—better than 42 percent from beyond the arc—and had five players score in double figures in the win.

Junior Cole Constantino keyed North Allegheny’s initial surge, draining two three-pointers during the run. Then, after the two teams traded baskets for the remainder of the first quarter and into the second, the Tigers embarked on another 13-0 run. That spurt stretched the Tigers’ lead to 18 and gave them a sizable advantage heading into the locker room at halftime. Constantino led the team at the break with 13 points, including three treys.

The second half proved to be much of the same as North Allegheny slowly but surely padded its lead. The Tigers final lead of the contest was their largest at 38 points.

Constantino and classmate Will Sandherr led the Tigers in scoring, notching 15 points apiece. Sandherr did all of his damage from beyong the three-point line, going a perfect five-for-five from that range. Seniors Elijah Zeise, Mike Carter and David Haus finished with 14, 11 and 10 points, respectively. Haus nearly registered a triple-double by adding 10 rebounds and eight assists. For his all-around effort, he earned the honor of being named the Wright Automotive Player of the Game.

The Tigers improved to a perfect 10-0 overall and 4-0 in Section 3 play with the victory. Now, North Allegheny faces its toughest two tests of the season with road trips to No. 2 Hampton on Tuesday and No. 1 New Castle next Friday. Tuesday’s matchup against the Talbots will tip-off at 7:30 p.m. and be broadcast live on the NA Sports Network.