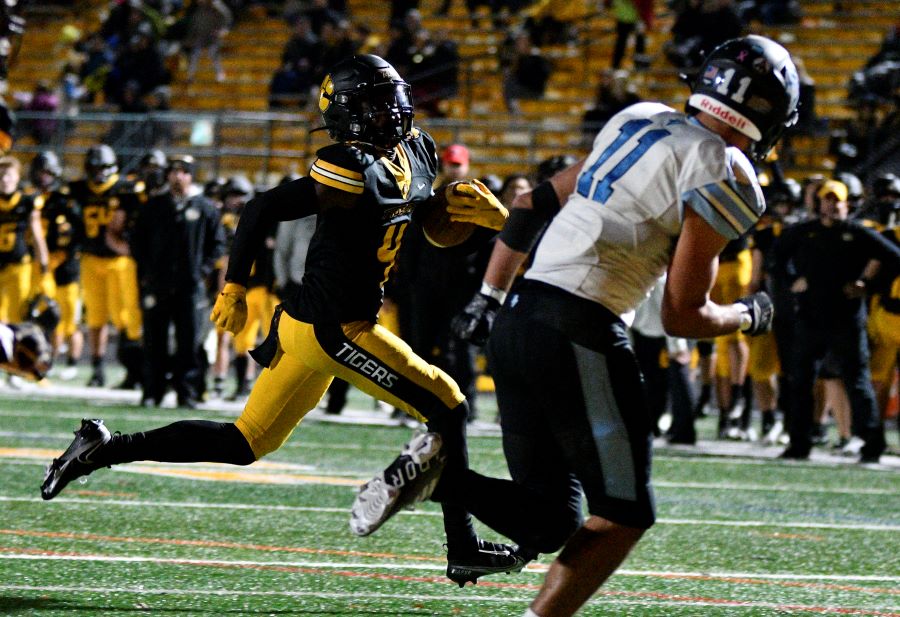 North Allegheny overcame a two-touchdown deficit twice on Friday night and rallied for a thrilling 27-26 win over Seneca Valley at Newman Stadium. The victory eliminated the Raiders from postseason contention and pulled the Canon-McMillan Big Macs into the Class 6A playoffs as the No. 4 seed. The Tigers, who had already locked up the Tri-County Five Conference title last week, will host Canon-McMillan in the WPIAL semifinals on Friday, Nov. 11.

Seneca Valley senior quarterback Graham Hancox accounted for four total touchdowns on the night and tossed a 45-yard scoring pass on a screen to senior Luke Lawson with 7:41 remaining in the first period for an early 7-0 lead. Following a 3-and-out by the Tigers, the Raiders struck again with 3:26 to play in the opening stanza on a 4-yard scoring run by Hancox for a 13-0 lead. Hancox was flagged for a personal foul on the touchdown which proved costly as Seneca Valley kicker Jacob Adams missed the extra point, keeping the score at 13-0.

The North Allegheny offense found success on its next possession and converted on a key 4th and 5 from the SV 35-yard line with a 30-yard pass from Logan Kushner to Anthony Varlotta, advancing the ball to the Raiders 5-yard line. Two plays later, senior Andrew Gavlik dove across the goal line on a 2-yard touchdown run to cut the Seneca Valley lead to 13-7 with just six seconds remaining in the quarter.

On the ensuing kickoff, Seneca Valley’s Kai West coughed up the football, which was recovered by sophomore Kyle Langdon at the SV 22-yard line. The Tigers needed only three plays to capitalize as Kushner delivered a 9-yard scoring strike to a sliding Khiryn Boyd in the end zone to tie the score at 13-13. Kicker Nick Van Winkle tacked on the extra point to give North Allegheny a 14-13 lead with 10:40 left on the second quarter clock.

Seneca Valley leapfrogged back in front with 7:33 left in the second quarter on a 1-yard touchdown run by Hancox for a 19-14 lead. The Raiders’ two-point conversion attempt failed.

SV added one more touchdown before halftime courtesy of a 34-yard screen pass by Hancox to senior Chris D’Appalonia for a 26-14 lead with 2:09 left in the second quarter. While the Raiders amassed 263 yards of total offense in the first half, the Tigers defense limited their conference rival to just 71 yards for the remainder of the night.

Sparked by a 51-yard run by Gavlik early in the third quarter, North Allegheny marched the football deep into the Seneca Valley territory on its first drive of the second half. However, on a 4th and goal from the SV 2-yard line, D’Appalonia sacked Kushner for a 15-yard loss and the Raiders turned the Tigers away.

With 3:58 remaining in the third quarter, the North Allegheny defense came up with a crucial turnover when Boyd intercepted a Hancox pass on a flea flicker down the left sideline at the NA 45-yard line. The interception was Boyd’s team-leading fifth of the season. The Tigers quickly capitalized on the turnover and punctuated a 7-play, 55-yard drive with a 5-yard scoring run by Boyd on a reverse, cutting the deficit to 26-21 with 57 seconds remaining in the third quarter.

Seneca Valley’s next drive also ended in a turnover when Daniel Sellers sacked Hancox on a 4th and 10 play and forced a fumble that was recovered by Jack Yatchenko at the NA 37-yard line.  Once again, the North Allegheny offense converted the turnover into points and traversed 63-yards to paydirt. The drive was keyed by a 39-yard pass from Kushner to Boyd at the SV 11-yard line. Two plays later, senior Evan Lyon toted the football six yards for a touchdown to put the Tigers on top, 27-26, with 7:47 left in the fourth quarter. NA’s 2-point conversion try following the touchdown failed.

With their playoff hopes hanging in the balance, the Raiders had two more chances to take the lead in the remaining minutes but the NA defense stonewalled Seneca Valley each time and the Tigers prevailed, 27-26.

For Seneca Valley, Wayne Pirt led the ground game with 124 yards on 19 carries. Hancox completed 10 of 20 passes for 159 yards, two touchdowns and an interception. Lawson reeled in five passes for 91 yards and a touchdown.

With the win, North Allegheny improves to 9-1 overall and finishes the conference slate with a 4-0 mark. Seneca Valley’s season comes to an end with a 6-4 overall record and 1-3 mark in the conference play. The Tigers will host Canon-McMillan in the WPIAL semifinals on Nov. 11.