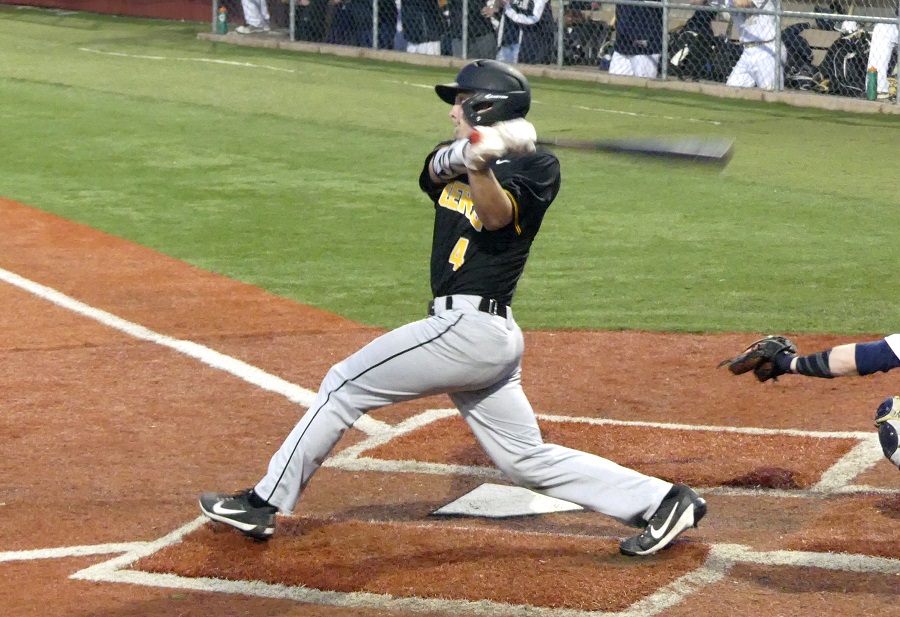 Despite a late-game rally by North Allegheny that erased a six-run deficit, Butler spoiled the Tigers comeback bid with a literal walk-off victory on Monday night, 9-8, at Kelly Automotive Park. Alec Bayer’s bases loaded walk in the bottom of the seventh gave the Golden Tornado a one-run win in a topsy-turvy Section 1-AAAAAA contest.

Butler scored the game’s first run in the bottom of the second inning on an RBI single by Jacob Keene for a 1-0 lead. North Allegheny quickly tied it at 1-1 in the top of the third inning on a two-out RBI single by Bobby Brown that scored Ben Surman. Surman had a fine night at the plate, going 2 for 3 with a walk and three runs scored.

The Golden Tornado hung a crooked number on the scoreboard in the bottom of the fourth to break the deadlock, scoring six times in the inning. Isaiah Lucas gave Butler a 3-1 lead with a two-run triple. Ryan Lynn added a two-run double later in the inning, followed by Adam Hohn’s RBI double and a run-scoring single courtesy of Dallas Hays for a 7-1 Butler advantage.

Facing one of Butler’s top pitchers and trailing by six runs, the Tigers could’ve easily packed it in for the rest of the night. Undaunted, North Allegheny rallied and scored four runs against the Santa Clara recruit in the top of the fifth to trim the deficit to 7-5. The fifth inning began with a single by Surman who scored moments later on an inside-the-park home run by Luke Trueman. The exhilarating round tripper by Trueman sparked the Tigers lineup. Two outs followed the Trueman home run but North Allegheny kept the fifth inning going courtesy of a single by Colin Cain and an RBI double by Alex Mesaros. On the double, Mesaros advanced to third base on the throw to the plate and scored on a Butler error, cutting the Golden Tornado lead to 7-5.  Reaching base four times and also driving home two runs on the night, Mesaros was selected as the Wright Automotive Player of the Game.

Butler got one run back in the bottom of the fifth on an RBI single by Bayer to increase the lead to 8-5. However, the Tigers got even in the top of the sixth against reliever Brandon Fleeger. With the bases loaded and two outs, Cain brought home a run on a walk. With Fleeger struggling with his command, Mesaros forced in a run when he was hit by a pitch with the bases loaded to bring the score to 8-7, Butler. Fleeger immediately uncorked a wild pitch that scored Justin Hamm from third base and the score was tied, 8-8. The contest remained deadlocked until Bayer’s bases loaded walk in the bottom of the seventh lifted Butler to the 9-8 win.

Despite being saddled with the loss, North Allegheny reliever Kevin Janosko pitched a solid 2.2 innings out of the bullpen and struck out six. The Golden Tornado’s Ryan Lynn tossed 1.1 innings and picked up the victory in relief.

Following the loss, North Allegheny drops to 10-4 overall and 5-3 in section play. Butler improves to 10-5 overall and 4-4 in the section. The Tigers will host No. 1-ranked Pine-Richland on Wednesday night. The game will be broadcast live via the internet on the North Allegheny Sports Network.