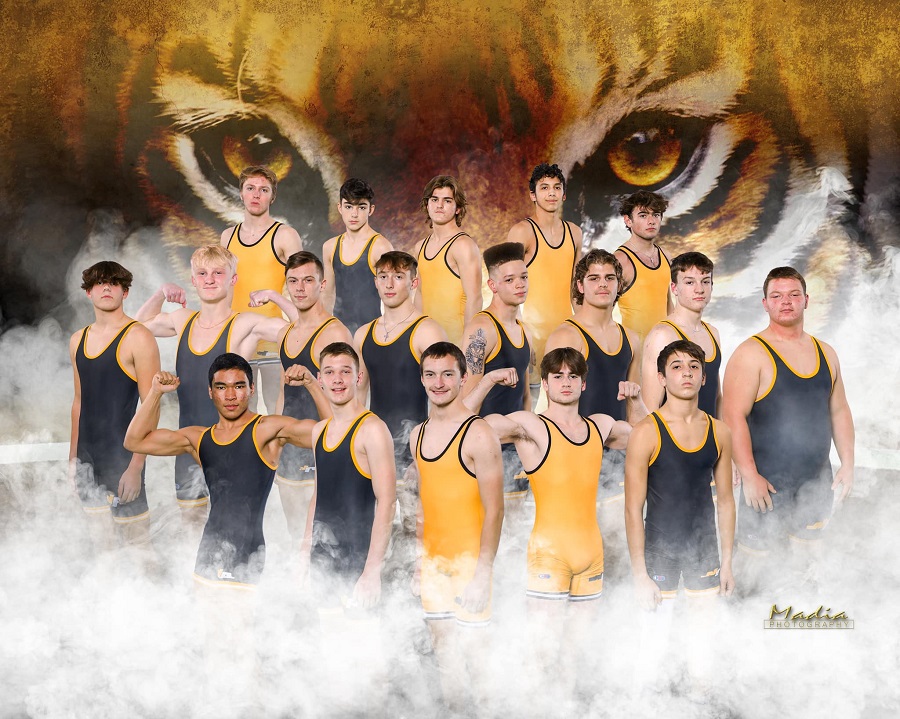 The North Allegheny wrestling team reached the quarterfinals of the WPIAL Team Tournament on Wednesday night with a 38-27 win in the opening round over Bethel Park at Canon-McMillan High School. Despite a valiant effort in the quarterfinals, the Tigers ultimately fell to the host Big Macs, 43-24.

In the first round matchup with the Black Hawks, the Tigers won four of the first five bouts to jump out to a 20-6 lead. Starting at 106 pounds, Casey Walker pinned Seth Miller in 21 seconds for an immediate 6-0 advantage. William Bentrim followed with a hard-fought 3-1 decision over Aiden Bench to give NA a 9-0 lead. For his efforts, Bentrim was named the Wrestler of the Meet by the North Allegheny Sports Network.

While a win by fall for Bethel Park’s Mason Kernan at 120 pounds temporarily halted NA’s momentum, the Tigers earned bonus points in the next two bouts with a win by fall from Dylan Coy at 126 pounds and tech fall victory courtesy of Nathan Monteparte at 132 for a 20-6 North Allegheny lead.

Back-to-back decisions by Bethel Park trimmed the NA lead to 20-12 before consecutive pin falls from Kellen Buggey (152) and Adam Rohan (160) increased the score to 32-12, Tigers.

Two straight pins pulled the Black Hawks to within striking distance at 32-24. However, Aidan Buggey clinched the victory for the Tigers with a win by fall over Logan Pettigrew for a 38-24 lead. In the final bout, Bethel Park’s Jacob Brown picked up a 5-4 decision to bring the final score to 38-27, North Allegheny.

Against Canon-McMillan, the Big Macs won the first two bouts for a quick 10-0 lead. NA responded immediately with a 6-5 decision by Coy over Andrew Binni at 126 pounds and Monteparte followed with a win by fall over Mikhail Krenzelak to trim the CM lead to 10-9. At 138 pounds, Jayson Flener earned a 5-3 decision over Josiah Gardner to pull North Allegheny in front, 12-10. Flener was named the Wright Automotive Wrestler of the Meet.

Unfortunately, the two-point lead was short-lived as Canon-McMillan won the next five bouts, including three wins by fall, to take a commanding 37-12 lead to clinch the victory.

Following Wednesday night’s outcome, North Allegheny moves to 7-1 overall on the season. The Tigers return to action on Tuesday, Feb. 15 with a tri-meet against Connellsville and Penn-Trafford. The tri-meet will be broadcast live by the North Allegheny Sports Network.