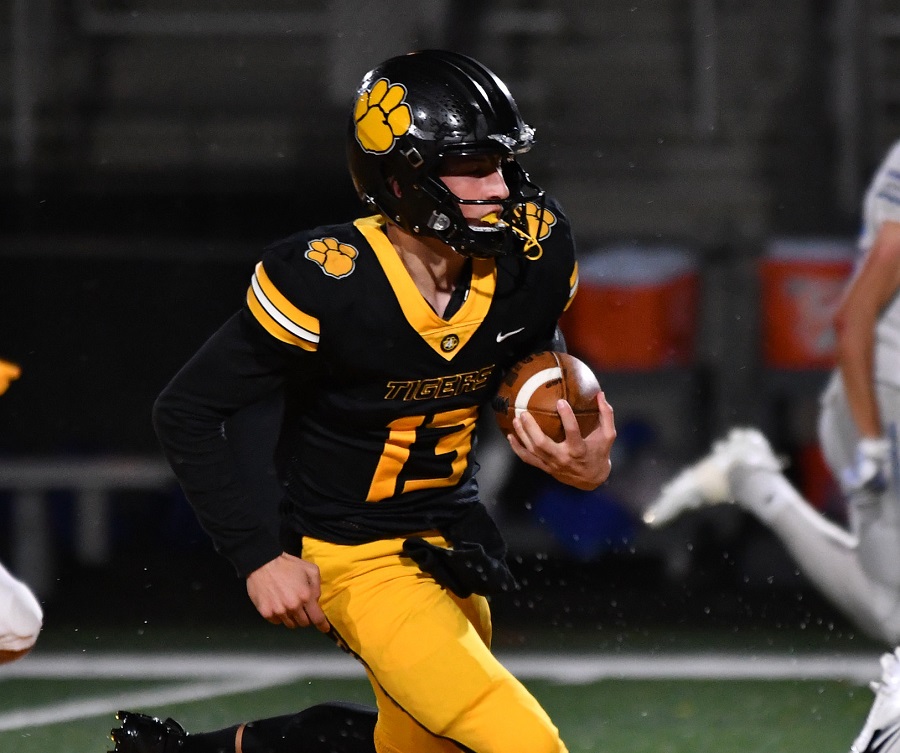 The North Allegheny Tigers won their third in a row on Friday night and clinched a WPIAL playoff berth with a 65-13 win over Hempfield on senior night at Newman Stadium. The 65 points scored were the most by the Tigers in the Art Walker era, which spans the last 17 years. It’s also the second time this season North Allegheny exploded for over 60 points in a game.

Sophomore Khiryn Boyd had a touchdown trifecta, hitting paydirt three different ways with a touchdown catch, a touchdown run and a kickoff return for a score. Sophomore quarterback Logan Kushner was 5 for 9 through the air for 125 yards, two scoring passes and added a 67-yard touchdown run en route to Wright Automotive Player of the Game honors. On the ground, Kushner finished with 81 yards on four carries.

After a three-and-out by Hempfield to open the ballgame, the North Allegheny offense asserted itself immediately with a 7-play, 54-yard drive that culminated on an 8-yard touchdown run by J.R. Burton for a 6-0 lead. The extra point kick failed.

The Spartans responded on their next possession with a 9-play, 79-yard march that was capped on an Eli Binakonsky 2-yard touchdown run to tie the game at 6-6 with 4:11 left in the first quarter. Hempfield’s extra point kick was blocked.

On the ensuing kickoff, Boyd returned the ball 99 yards for a touchdown to immediately give NA the lead back, 13-6, with 3:56 remaining in the period. After the Boyd kickoff return touchdown, the rout was on.

On the first play of the second quarter, Kushner galloped 67 yards on a touchdown run to increase the Tigers lead to 19-6. On the extra point, senior Tanner Potts improvised a low snap and ran the ball into the end zone for a two-point conversion and 21-6 advantage. With 8:39 left in the half, Kushner tossed a 16-yard touchdown pass to Boyd for a 28-6 lead.

Following a fumble recovery at the Hempfield 4-yard line by senior Jacob Porter, the Tigers scored again on a 4-yard touchdown run by Boyd to grow the lead to 35-6. Just 18 seconds elapsed between the Boyd touchdowns.

Hempfield’s next possession ended on a diving interception by junior cornerback Campbell Melzer at the 50-yard line. Two plays later, Kushner tossed a screen pass to Cole Dorn for a 45-yard touchdown and a 42-6 lead with 4:26 left before intermission. A bad snap by the Spartans rolled through the back of the Hempfield end zone with 27 seconds left in the half to balloon the score to 44-6, Tigers.

In the third quarter, two touchdown runs by Potts from 22 and 38 yards out, respectively, increased the North Allegheny lead to 58-6. Junior running back Steven Palermo scored NA’s final touchdown of the night on a 47-yard run with 8:52 left in the fourth quarter. Hempfield capped the scoring with 5:35 remaining on a 22-yard touchdown run by Lucas Moore to bring the final score to 65-13, Tigers.

With the win, North Allegheny improves to 6-3 overall and 4-2 in conference play. Hempfield falls to 2-7 overall and 0-6 in the conference. The Tigers will visit Seneca Valley in the regular season finale next week.