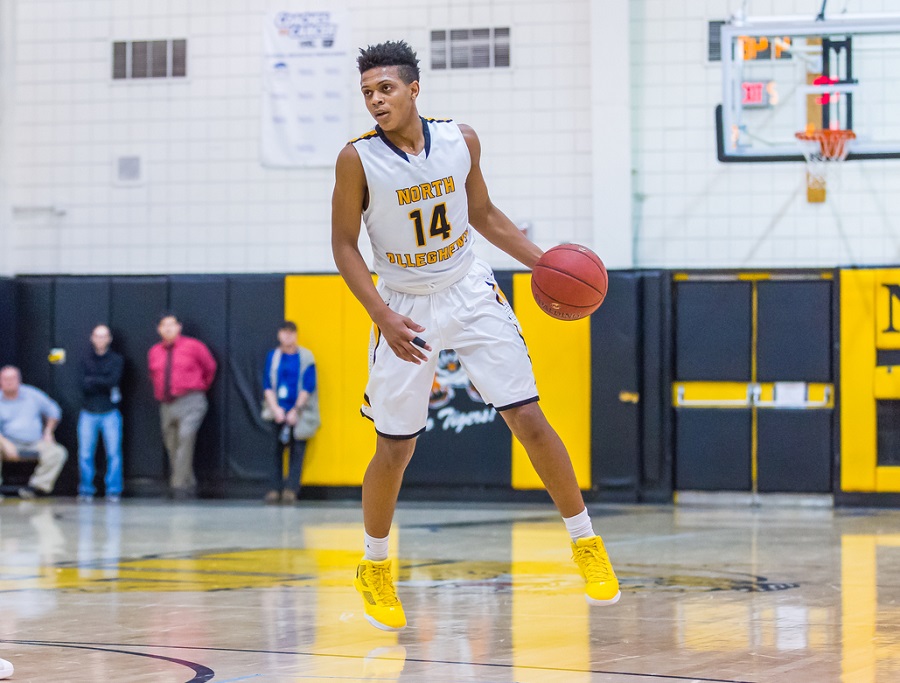 Curtis Aiken’s perimeter jumper at the buzzer lifted North Allegheny to an exhilarating 36-34 triumph at Seneca Valley on Friday night. Totaling a game-high 19 points and sinking the game winning shot, Aiken was selected as the Wright Automotive Player of the Game. The win was North Allegheny’s 18th in a row against Seneca Valley.

With the game tied 34-34, the Tigers held the ball during the last minute of the game for the final shot of regulation. That plan nearly went awry when a near-errant pass was saved by Aiken along the sideline with less than 10 seconds remaining. Senior Isaac Barnes accepted the ball from Aiken on the save and then returned a pass to Aiken in the right corner who drilled a long two-point jumper before the final horn sounded to give NA a thrilling Section 1 win.

The game didn’t begin quite as excitably as it ended. The game was tied 5-5 after one quarter and both teams appeared lethargic in the first half. NA led 15-14 at intermission and took an 18-14 lead when Aiken buried a 3-pointer to start the second half. Seneca Valley responded with a 13-2 run to take 27-20 lead late in the third quarter. The Raiders were paced by junior Chris Hart who scored a team-high 11 points.

In the fourth quarter, the Tigers heated up and took a 34-32 lead on a 3-pointer by Barnes in the left corner. The Raiders tied the score at 34-34 with just over a minute to play on a layup by Jacob Banofsky. That set the stage for the dramatic finish and game-winning bucket by Aiken.

Playing short-handed on Friday night, post players Barnes and junior Zach Johnson netted five and four points, respectively. Johnson did a fine job of playing through foul trouble and remained on the floor despite playing with four fouls throughout most of the fourth quarter. While their point total was minimal, the contributions of Barnes and Johnson were significant. Junior Ray Sandherr tallied four points, while senior Devin Bluemling and junior Jon Van Kirk tallied two points apiece.

With the win, North Allegheny leaps to 7-4 overall and 3-2 in Section 1-AAAAAA. Seneca Valley dips to 6-7 overall and 1-4 in the section. The Tigers host Warren JFK on Saturday night at 7:30 p.m. at the Hoops For A Cure classic.