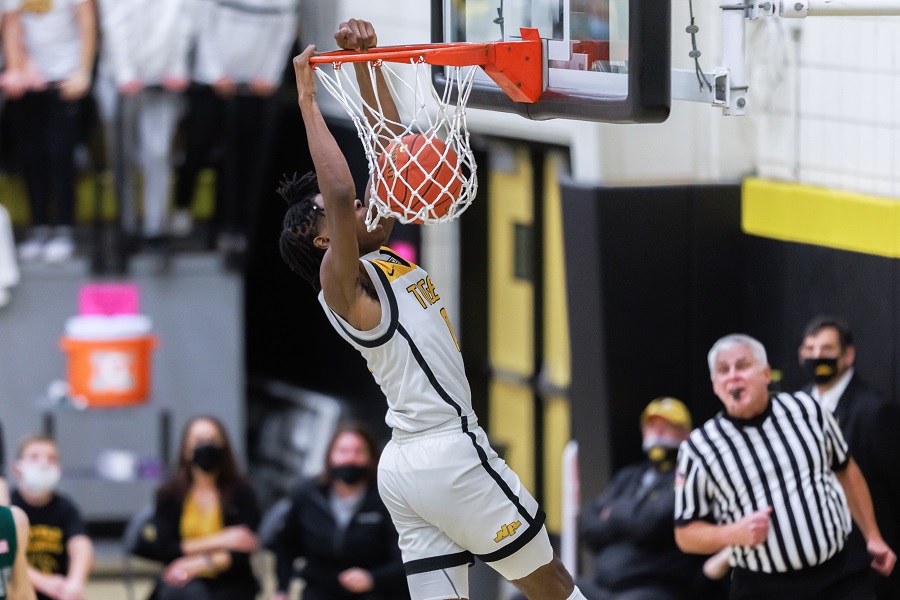 Senior Matt McDonough’s 3-pointer with 0.8 seconds left in regulation forced overtime and North Allegheny prevailed in the extra session, 74-70, over neighborhood rival Pine-Richland on Friday night in Section 1-6A action. McDonough finished with a game-high 34 points and was named the Wright Automotive Player of the Game. The victory is North Allegheny’s sixth consecutive overtime win dating back to the 2019-20 season.

McDonough developed the hot hand early in the first half and helped the Tigers build a 24-12 lead with six minutes remaining in the second period. Pine-Richland senior Joseph Dudkowski sparked a 14-4 run for the visitors, tying the game at 28-28. Dudkowski totaled 11 points in the first half and McDonough netted 20 as the teams traded baskets in the final two minutes of the half, leaving the game deadlocked at intermission, 33-33.

Pine-Richland opened the second half with a 3-pointer by senior Andrew Alexander to grab a 36-33 lead. The Rams’ advantage grew to as large as eight points in the third quarter thanks in part to the efforts of senior Luke Shanahan, who scored 11 of his 14 points in the second half. Pine-Richland led 52-44 with one minute left in the third quarter before the Tigers began to chip away.

Trailing most of the second half, North Allegheny trimmed the deficit to 61-60 on a 3-pointer by senior Robby Jones with 57 seconds remaining in the fourth quarter. Jones finished in double figures with 12 points.

After a pair of free throws by Dudkowski extended the Pine-Richland lead to 63-60 with 23 seconds left, the stage was set for McDonough’s heroics in the waning seconds. Following a North Allegheny time out with 9.8 seconds remaining, the Tigers were able to set up McDonough for the game-tying trey to force overtime.

McDonough ties the game with less than a second left!! 63 all! pic.twitter.com/baJTh7M2dn

In the OT period, sophomore Joey Dopirak scored the opening basket for North Allegheny to grab a quick 65-63 lead. Dopirak finished with 13 points off the bench. From that point on, the Tigers were able to grind out the win with hard-nosed defense and crucial rebounds on the offensive glass by Dopirak and sophomore Ty Iwanonkiw, propelling NA to a 74-70 victory.

For the Rams, Dudkowski led with 26 points and 9-of-10 shooting from the free-throw line. Along with Shanahan’s 14 points, Alexander totaled 13 on the evening. Both Shanahan and Alexander fouled out in the second half.

With their fourth consecutive win to open the 2021-22 season, the Tigers improve to 4-0 overall and 2-0 in Section 1-6A. Pine-Richland falls to 1-3 overall and 0-2 in the section. North Allegheny will host Mt. Lebanon on Tuesday night at 7:30 p.m. The game will be broadcast live via the internet on the North Allegheny Sports Network.