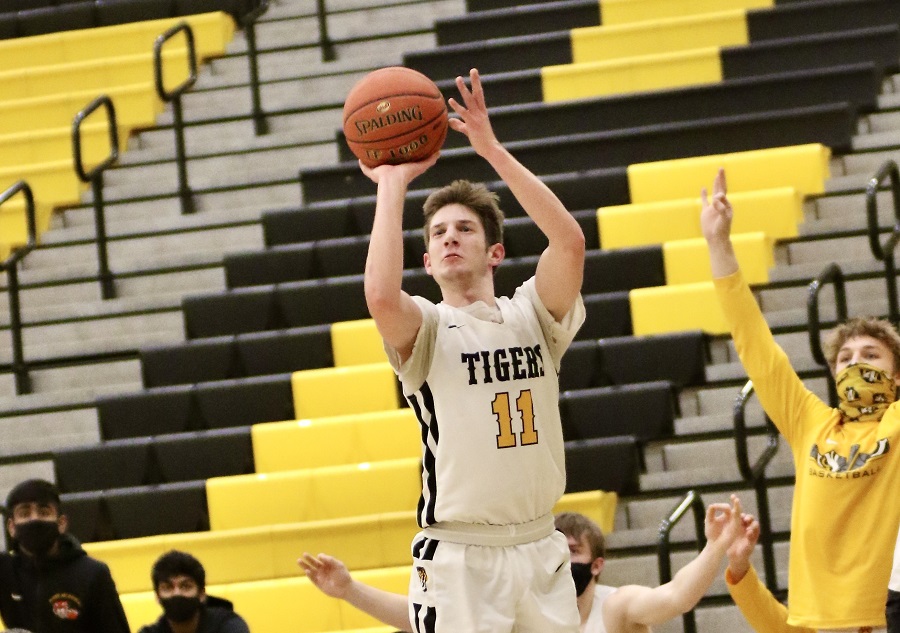 With a feisty and ferocious defense, the North Allegheny Tigers pounced on the Allderdice Dragons for a 70-55 non-section win on Sunday night. NA forced Allderdice into 16 first-half turnovers and took the fire out of the Dragons offense. The Tigers capitalized on Allderdice’s miscues for a 34-27 halftime lead and stretched the advantage to double figures in the second half.

Leading the charge for North Allegheny on this night was junior guard Matt McDonough, who netted a team-high 19 points. McDonough buried three 3-pointers and slashed his way to the rim to provide a consistent source of offense. With a great all-around performance, which included five rebounds, four assists and one steal, McDonough was selected as the Wright Automotive Player of the Game.

Also making a significant impact was senior Khalil Dinkins with 17 points and nine rebounds, coming just one board shy of a double-double. Junior Connor Casten netted 12 points and senior Ethan Lake chipped in with 10 points.

Allderdice was paced by junior Kiere Henning, who did his best to keep the Dragons in the game, posting a team-best 18 points with 4-for-6 shooting from beyond the arc. Junior Cam Butcher reached double figures with 11 points.

North Allegheny improves to 13-5 overall, while Allderdice drops to 4-4 on the season. The Tigers will host Butler on Monday night at 7:30 p.m. The game will be video streamed live by the North Allegheny Sports Network.